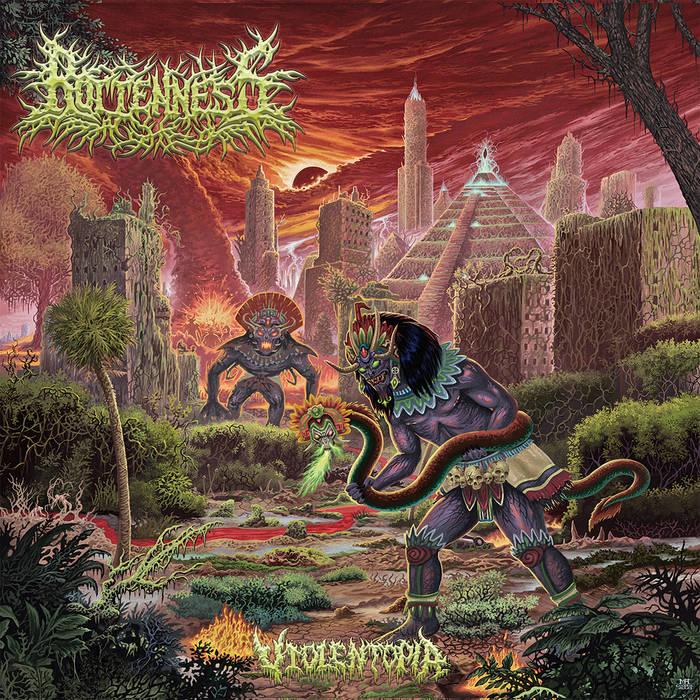 The new Rottenness has dropped, and that has piqued my interest alright, because this is a band I have always appreciated for their relentless dedication to brutal death metal. For an act that has been around for quite some time, their output has always been pretty consistent throughout, delivering straight-forward brutal death metal, and that while their line up has never been the most stable to put it mildly.

After a short harrowing intro, proceedings kick off into a wild and varied ride into brutal death metal country. Their style perhaps isn't the most original out there, but the band more than makes up for this in the relentless, precise execution and brain-pulverizing brutality of their music. Furious blasting ferocity alternates with heavy slower stomp and driving polka beats throughout, recalling like-minded units such as Putrid Pile, Guttural Secrete, Lividity and Houwitser, but the influence of older death/grind bands is noticeable too. Deeply embedded into this band's DNA are traces of the early works of Sinister, Hypocrisy and Terrorizer, but traces of old school grindcore (think old Napalm Death and Excruciating Terror here) pop up as well. It's not all straight-forward hack-em-up, though. In the second half of tracks like 'Dragged Across Concrete' and 'Bitchmade At Birth', the band loosen the accelerator to let a sense of dissonance creep into the music, and throughout the total runtime of this album variation is a recurring something, allowing the aggressive death metal some space to breathe. The total package has been given a heavy and clear production that sounds contemporary, yet not sterile, which of course is a total plus.

As some of the lesser things on this album I'd point out that the spoken samples were pretty unnecessary, but this is something I seldom appreciate in general, and here it is no exception. The album closer, a cover of Molotov (no idea who they are, to be honest) is cool for a couple of listens, but eventually loses its appeal because it sounds so different from the rest of the album. Try to imagine 24-7 Spyz or Living Colour playing death metal here, that could kinda describe it.

Those few minor points (which are purely personal remarks on my part) do not take away anything from this great modern death/grind album. If you are into the bands mentioned above, or grinding death metal in general, this one should go down easy enough.