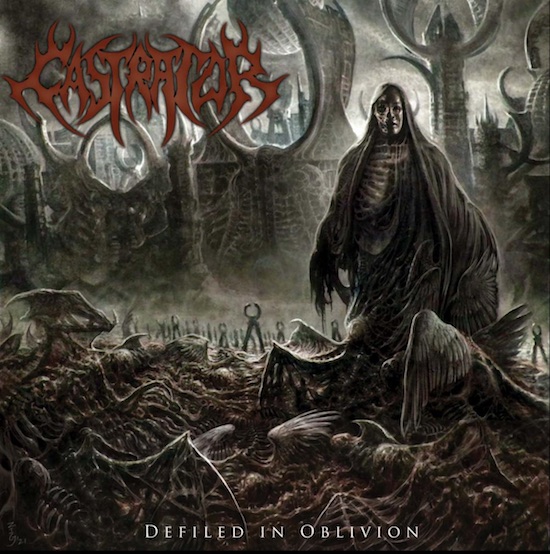 There’s certainly no shortage of death metal nowadays, and I for one, despite eventually coming across some mediocre bands, still enjoy finding new or overlooked acts. One such case is NYC based international all female death metal band, Castrator and their debut full length Defiled In Oblivion.

The band was originally formed in 2013 and after a demo and EP, they finally unleashed their debut record. The most striking aspect and what will also create discourse is the band’s unapologetic and empowered lyrics. With this being an all-women act, and their chosen style of death metal leaning hard into pure aggression, it feels like a perfect match, every growl, every riff and every blast beat feels pissed off. The band do not mess around and make their statement pretty clear, and while I’m not a woman, the band’s sound and lyrics make a pretty compelling case through sheer sonic violence. And indeed, this is a nasty and violent death metal fare, complete with a bass-heavy and murky production, and appropriately snarling growls, courtesy of the band’s frontwoman Clarissa Badini (who is the one of the two major standouts). Her bandmate Kimberly Orellana is the other major standout. Her riffs and breakdowns are what sold me on this record, and indeed, these two flex their chops with defiant style. However, that’s not to discredit founding members Robin Mazen and Carolina Perez, whose command of the rhythm section on the bass and drum kit respectively is what completes the band’s utterly violent sound.

And what is exactly this sound? Castrator’s sound as a whole combines the rawness and grit of New York death metal, akin to acts like Suffocation, Immolation and Incantation, but with the technicality and flair of early Death with some thrash driven leanings. This is noticeable through the soloing of Kenny Andrews of Obituary and Moyses Kolesne of Krisiun, their solos combined with Kimberly Orellana’s superb riffing is how the band perfectly blend brutal death metal with more old school death metal, and without ever feeling like mimicry of the death metal of yesteryear. Outside the rough production, this is still very much a modern day death metal record. Lastly, even their cover of Venom’s 'Countess Bathory' is given a new meaning with the band’s style, and that is of itself commendable, because I usually dislike it when band’s close albums with a cover.

The only real issue with this record is the fact that it’s a straightforward death metal record. By 2022 we’ve had way too much death metal to spare, and even modern bands are starting to breakup, but beyond the circumstances, this is still a kickass record that stands on its own and I highly recommend to any death metal fanatics to check out.