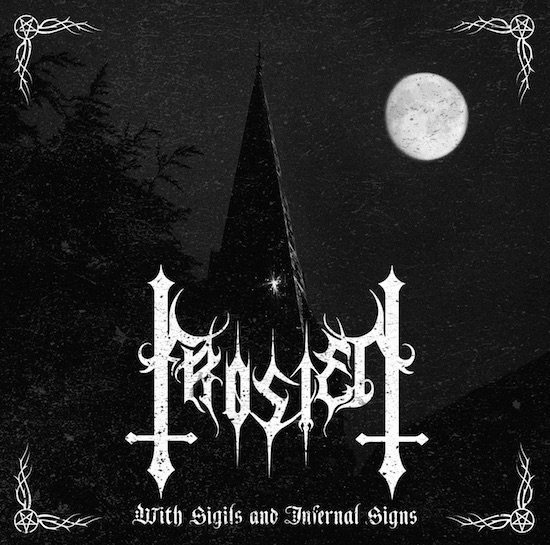 Type: Full-Length
Release Date: May 27th, 2022
Label: Purity Through Fire
Genre: Black
1 Under A Twilight Sky (Intro)
2 Ov The Black Flame
3 My Words Become Flesh
4 With Sigils And Infernal Signs
5 At Autumn's End
6 A Shadow In The Fog
MetalBite on YouTube

The United Kingdom spits out another black metal band. Some months ago, Sidious scorched the ground with “Blackest Insurrection”, now comes Frosten with their debut. The artwork, motif and aesthetics, reminds me of the best genre album of all times (“De Mysteriis…”, what else?), but the first track after the calm intro rather sounds like Impaled Nazarene, if they haven't just swallowed their rock ‘n’ roll tablets again. Suomi Finland F**k! Thank Lucifer, “Ov Black Flame” has more aces up its sleeve than just robotic hammering and sparsely equipped guitar lines. The song offers a healthy degree of variety and the melancholic ending marks a good bridge to the next outburst. 'My Words Become Flesh' relies on down-rolling riffing and stoic mid-tempo. The nagging of mastermind Azrael completes the strong performance. The reduction of velocity takes away the mechanized aura and leads the listener closer to the essence of true black metal. Nevertheless, there is also a great break to find here and Frosten accelerate the speed in the centre of the track.

Do Frosten present anything totally new? Of course not. That’s not necessary. Black metal is a well defined genre – with a lot of space between the crash barriers, but well defined. It is no master of constant transformation and doesn't want to be one. I do not need permanent innovation, I like to listen to an album like this one with its slight echoes of “Pure Holocaust”, although this “immortal” masterpiece celebrates its 30th birthday next year (a staggering number, isn’t it?). But this is just one facet of Frosten’s debut. On the other hand, 'My Words Become Flesh' alone has more melodic / fatalistic parts than the aforementioned classic. Additionally, the closer also holds some pretty melody-driven sequences.

The production does not shine with an overdose of different atmospheres. From a technical point of view, Frosten rather impresses with precision and a certain coldness. Therefore it comes as no surprise that With Sigils And Infernal Silence is based on a well-balanced mix. No doubt, this debut is a full package, including the great artwork, good songs, an adequate sound and sprawling lyrics that were not simply scribbled down. English black metal bands seem to have an affinity for overlong texts, but why not? Too bad that only four full songs have found their place on the output. Anyway, they do not suffer from too frequently repeated parts, they have a solid or even pretty good flow and they are immune against stupid gimmicks. With this said, Frosten have done much more right than wrong, even though the silent intermezzo on the fifth position does not add any value in my humble opinion. Supportes of more or less easily comprehensible, mid-harsh, authentic and always controlled black metal can put this release on their shopping list.