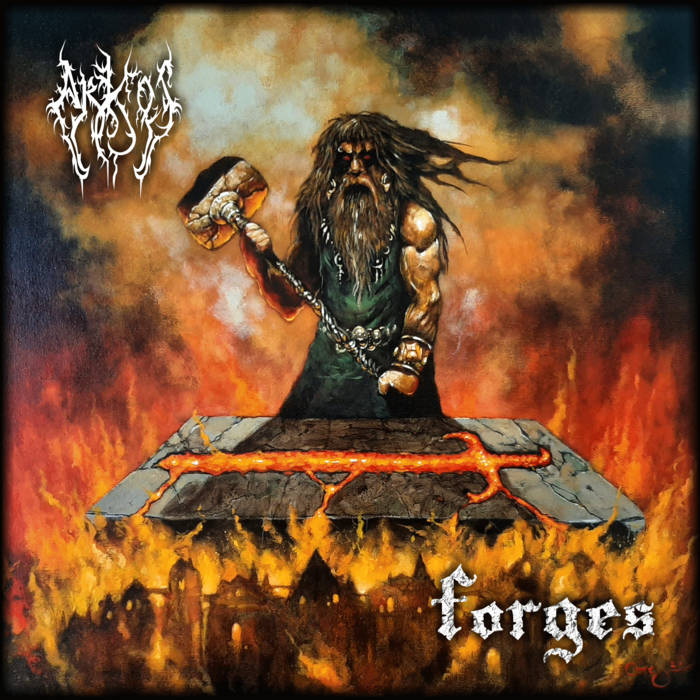 Arkos is a band from Montréal, Québec I’ve been following since the first time I saw them live in 2016. They were opening for Kalmah in my hometown of Sherbrooke and ever since then, anytime they’re in town, I’m there in the front row. So, fair warning, this review might not be 100% objective… like if any music reviews is objective… Anyway, on that note, let’s talk about Arkos. They're quite difficult to describe. I would say they broadly fall in the black metal category with a touch of death thrown in the mix but these labels are too reductive to truly represent their music as a whole. They incorporate so many different sounds and influences, especially since their album Tribe, where they went more melodic, adding even a bit of classical metal in the mix. This makes for a truly unique listening experience leaving you saying; wow! So freaking creative! Forges is their first EP and is the start of a trilogy of EPs depicting a fantasy infused war story.

Forges comprises 6 tracks, 3 traditional songs and 3 instrumentals. First of all, I need to talk about musicianship. From the tight drumming, creative riffs, shredding solos and perfectly audible bass lines (which is kinda rare in black metal). Everyone sounds better than they ever did. Their musical versatility shines on the instrumentals. 'Martyre' is a beautiful acoustic guitar piece, played by Amon. 'Adoration' has a rhythmic, tribal drum beat, played by Mammoth on small drums, accompanied by the main drums played by Unholy DeathHammer. 'Carcasse' is a classic Arkos song, catchy black metal riffs, excellent solos and the classic 2-man vocals of Mammoth’s deeper scream/growls and the high-pitched screams of The Crypt Whisperer. It will become a live staple, I’m sure.

'Héritage' is a weird one, the first 2/3 of the song is a slow build up with The Crypt Whisperer screaming gently as he plays a clean guitar melody. As things progress, a long and smooth sounding solo is played, pretty unconventional for black metal. Makes for a truly emotional moment, especially live! For the remaining third, It’s a more traditional Arkos song which means a simple yet super catchy but darker sounding melody all done with a fast tremolo picking.

'Misère' is essentially the acoustic guitar intro to their 11min song, 'Abomination'. Of all their discography, I think this is the best song they have ever written. The fact it’s pretty long gives space to truly build an atmosphere. One of the main riffs is so well written, it simultaneously makes me want to headbang but makes me emotional and gives me chills every time. Around 6 minutes and 45 seconds the song slows down to an almost complete stop playing progressively spaced-out single bass notes giving it a truly spooky vibe. All of that culminates into a powerful and emotional solo. As far as the negatives goes, I don’t have much to say. I mean sure the production could be better but being black metal, it fits the whole vibe pretty well. I am not a fan of the snare sound, however. It sounds a bit flat, especially during blast beats.

So, it’s safe to say I love this EP. It showcases everything that makes Arkos a great band, the musicianship, great lyrics and the unbelievable creativity. In a genre that seldom produces truly unique bands, Arkos is one to watch! I cannot wait for the other EPs.