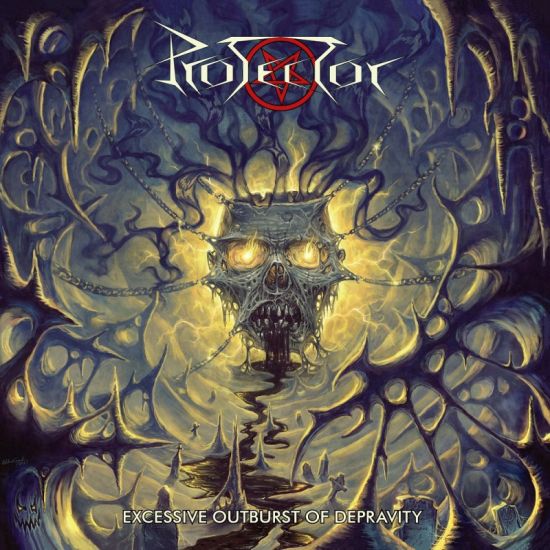 There is almost no thrash band that didn't release at least one “stinker” in their career. There is just one real exception that comes to my mind – Protector. Even The Heritage which was released in 1993 (and we all know that this wasn't the best time for metal) was a very old-school album that didn't have too many flaws. After their reunion in 2011 they always delivered great stuff and so do they with Excessive Outburst Of Depravity.

Starting with 'Last Stand Hill' the German-Swedish collaboration don't take any prisoners. Old-school thrash riffing meets some classic heavy metal riffs and a few death metal influences (especially in Martins vocals) and this all happens with 100mph. There are almost no parts on the album where the band decreases their tempo in the songs ('Open Skies And Endless Seas' and 'Thirty Years In Perdition' (with a casual Jew's Harp intro) are the more mid-tempo exception but therefore they are some brutal thrash avalanches that cannot be stopped once it started) and fortunately they never appear to be boring or repetitive because they put some breaks and bridges at the right time so all is very diverting and you don't get the impression of having heard this all before. The songs all appear from a single casting and are absolutely coherent. Maybe 'Perpetual Blood Oath' with its demonical voice intro and 'Cleithrophobia' are the most brutal and aggressive tracks on Excessive Outburst Of Depravity because they both don't leave any space to breathe and rest. But probably everybody will find their own personal faves on this album; it will not be too difficult because of the very entertaining songwriting. It is very hard to find a weaker point on the album and I have to confess that I am still searching for the first one to discover. Also the production is done very well, powerful and well-balanced which also isn't a big surprise was the album mixed and mastered by Patrick W. Engel.

Martins voice is as rasp and hateful as always and this time they have focused pretty much onto WWII and the things happening in that time like title like 'Referat IV B4' (that was a part of the Nazi Gestapo department where the Holocaust was organized) or 'Open Skies And Endless Seas' reveal. Besides the topic of 'Referat IV B4' goes very deep into the German history of the Third Reich and is much more beyond the usual historic knowledge one may have. But also tracks like 'Last Stand Hill' or 'Thirty Years Of Perdition' deal with historical background and what are maybe the most amazing lyrics are them in 'Cleithtrophobia' where Martin wrote about his personal fear and explains with this why he doesn't fly anymore. A very brave step I would say.

So thrashers, get your album of the year right now!!!

Diabolical hate über alles is surely a very thrashy feeling… no, not really. It is a very sad truth that authenticity is not Mille's core competence any more and Destruction have catapulted themselves into meaninglessness a long time ago by releasing one mediocre work after the other. I will always respect these pioneers for the groundbreaking creativity and the uncompromising courage they had in their early days, but sometimes we have to broaden the scope. Germany had more to offer than the "Big Teutonic Three" and Protector is one of these more or less overlooked units that deserve our attention as well. Despite numerous line up changes, they never showed commercial ambitions. No "Endorama" far and wide! Either way, their best album so far is A Shedding Of Skin, at least in my humble opinion. But this full-length gives no indication for Excessive Outburst Of Depravity, because it was recorded by a completely different line up.

Nevertheless, most of us will know what they can expect when it comes to a new, well, outburst of the now German-Swedish institution. Protector still swears by the old, rough thrash metal. The death metal elements are present as well, but they do not play the main role here. It is not only the performance of Martin Missy, who rather nags and shouts instead of offering death metal growls. It is also the absence of down-tuned guitars and groovy elements that makes Excessive Outburst Of Depravity to an almost pure thrash metal work. And finally, it is the energetic riffing – and right now, right here we are at the best element of the material. An amazingly high number of the riffs hits the bull's eye. This feature makes it clear early on that we are getting to hear an extremely good work here. The riffs sound sharp, edgy and fresh and they drive the songs brilliantly (and me almost insane). Missy's voice is good, no doubt about it, but it does not make the difference. Instead, the guitar work lets the record shine in bright light.

Needless to say that the four musicians do not deliver any kind of soft sounds, right? A title like 'Open Skies And Endless Seas' may indicate a romantic view on the world, but only graduated fools connect the name Protector with romanticism. This track combines dragging mid-tempo with fast sequences and its substance justifies the playtime of five minutes with great ease. Usually, the quartet acts with a higher quantum of velocity. The excellent opener 'Last Stand Hill' sets the direction and its power, directness and strength are absolutely exciting. This song with its merciless verses, the comparatively catchy chorus and the mosh part before the solo marks a perfect entry point. Moreover, it is great that it goes straight to the point – no intro delays the onset of musical violence.

But a thrilling introduction alone does not make a good album, if I am not mistaken, and we have seen so many bands that forgot that somehow annoying rule. However, don't worry, Protector swings the axes competently during the entire work. It's cool to experience how juvenile and lively the songs break out of the boxes. 'Pandemic Misery', the second track, is almost even better than the opener. It seems to have the power to kill the Covid virus in a battle one against one. But bad luck, I have heard that the virus is an invincible coward. Either way, the outstanding and churning guitar work is fantastic again and the whole song sounds like an ingenious leftover from the eighties (if we forget for a moment that forty years ago nobody was talking about pandemics – so let us rename the song, call it "Nuclear Misery" and then everything fits perfectly).

A detail I like very much on Excessive Outburst Of Depravity is that the mid-paced parts are as powerful as the dominating high-velocity eruptions. 'Perpetual Blood Oath', for instance, scores inter alia with its mighty, slowed down mid-part. The dynamic and spiky lines of 'Cleithrophobia' add another cool feature. Yet it is almost senseless to pick out single tracks, because all of them enrich the record. Well, this statement brings me to the conclusion. Excessive Outburst Of Depravity is an album each and every thrasher with an affinity for the Teutonic approach will enjoy – with one single exception! Tom Angelripper cannot be sure any longer that he and his comrades are the "Lords of Depravity". Maybe Protector will challenge him for this title.