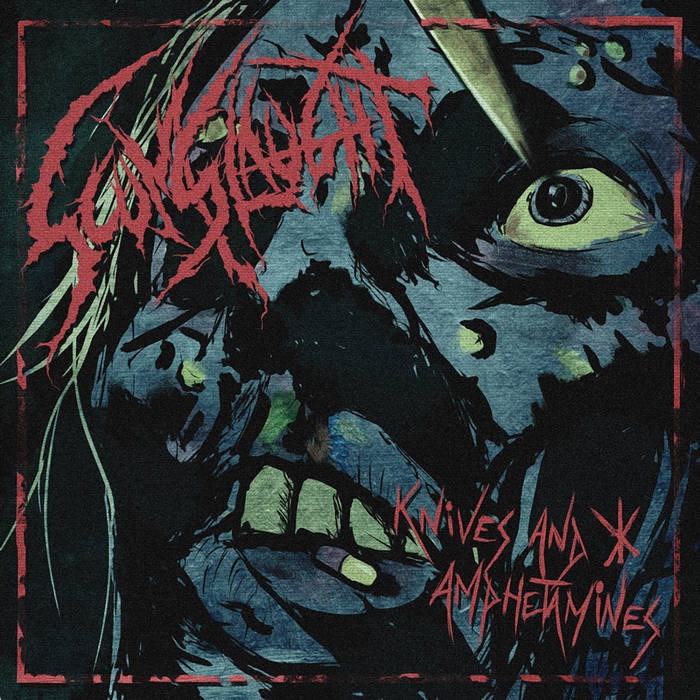 This is a nasty, filthy little surprise, this one. Seemingly coming from out of nowhere for so far as I know, this putrid ditty comes flying out, straight for the throat, ready to rip and tear with jagged claws. From the title to the artwork and music, this exudes old school unpleasantness from every orifice. Simply stated this is a primal form of thrash metal cross-bred with sturdy old school hardcore punk, a combination that does the rounds a lot these recent years, but seldom as good as this.

The basis for Scumslaught's sound is formed, as stated above, by combining the sounds of undistinguished thrash metal bands like early Sacrilege (UK), Concrete Sox, Aggression and Slaughter (both the Canadian ones), with crusty hardcore punk that mostly had me thinking of acts such as Crude SS, Anti-Cimex, early Disfear and Mob 47, to name a few. Primitive blast-beats also spring up throughout, really hammering home a nasty Repulsion vibe, while the band does not shy away from switching gears to chugging and slow parts either, bringing the mighty Hellhammer to mind, complete with the almost mandatory "UGH" punctuating these sections. On top of this gnarly yet varied concoction come the reverb vocals of Ugly Jon Rot, a staple of most bands who share the same roach-infested DNA with Scumslaught. The raucous lead-work tops off this enjoyable cocktail of old school bliss, that perhaps is not the most original out there, but certainly manages to land some well-placed kicks to the abdomen regardless. The hidden track, a (kinda) cover of GG Allin's "Bite It, You Scum" is a fitting end to an enjoyable offering.

The old school (yet really of its time) music has been poured into a clear sounding, well-balanced production, that luckily manages to avoid the trappings of contemporary sound engineering. This little gem sounds powerful without losing its integrity, and all into the style will agree that that's a good thing. Filth-ridden punk metal like this has no need for the over-polished and ironed-out type of production of bands like Butcher Babies or Arch Enemy, am I right?

This is perfect fodder for those who can't get enough of black/thrash/speed metal with some serious crust punk snarl behind it. Those into Toxic Holocaust, Destructo, very early Bathory and others of the like can dig in without further thought. In a scene that, in my opinion, consists mostly of forgettable bands, Scumslaught are one of the few very much worth the time.