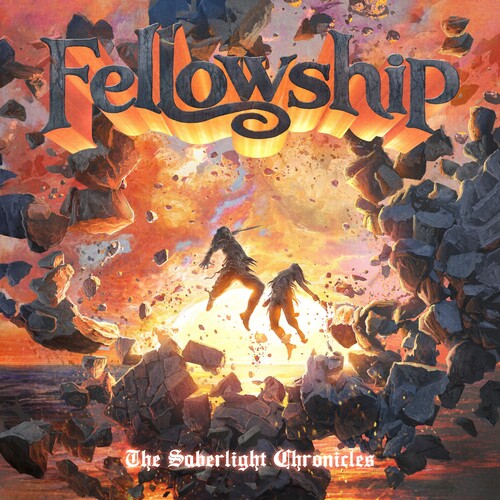 A long-awaited debut in the power metal circles, Fellowship’s first full-length effort somehow ticks all the right boxes. Why 'somehow' you dare ask? Let me explain… this is so far away from what I usually seek in power metal nowadays that I still can’t believe I enjoyed it so much. I mean, not 30 seconds after pressing play I could fill the cheese filling my body. A sugary overload of major key songs and happy vibes. What the hell?

The overjoyous feeling gives room to some slightly more dramatic twists that add a pleasant change and diversity to their music, but for the most part their songs are oozing with that feelgood (Disney?) heroic vibes that as soon as the album runs its course, you suddenly find yourself in your happy place wanting more. Hell, it’s dopamine metal, I now officially coin the term.

I’ve seen some people comparing them to Dragonforce or Twilight Symphony, but in this reviewer’s humble opinion both those bands never got near to the quality presented here. Fellowship managed to blend their influences so well that their take on the genre sounds like the real deal, not too original, but confident and brimming with quality songwriting.

The musicianship is obviously A-class and I was super stoked to see a drummer finally having songwriting credits, with Callum Taffen penning almost half of the songs! I’ll also have to make a special mention to both Sam Browne and Brad Wosko, who do a HELL of a job with the guitars with amazing solos and a stellar performance throughout, I’d dare say they are one of the greatest guitar duo in recent memory. Matthew Corry is not your typical fantasy power metal vocalist but he kicks major ass. His emotional performance is great and guides you through the chapters of the concept with enough conviction to get invested in the story. The sound is also very well balanced, a great mix that does justice to all instruments and serves the general mood of each song perfectly.

Now for a couple of minor flaws in my eyes: I wasn’t able to get behind the story too much although I had access to the lyrics, (maybe this will be addressed better in the physical version) but it felt a bit too vague to classify as a cinematic concept album which I imagine it’s what the band was going for. Also the album is a bit longer than I would have wanted, with some inevitable dip in quality at some points and truth be told, it could have been a flawless experience by simply removing two or three tracks altogether.

Fret not though, my nitpicking is not here to cast an inch of shadow to this fantastic album. Every person that lends his ear to Fellowship will be certainly rewarded cause The Saberlight Chronicles ultimately offers a very feelgood, exhilarating experience that reminds us why we fell in love with this music in the first place. With a few tweaks here and there, we can expect a true masterpiece down the road!

Worthy tracks to check: any random pick would be rewarding, but try 'Oak And Ash' or 'The Saint Beyond The River' to get a good taste of awesome.

The UK based symphonic power metal newcomers Fellowship have been on my radar for quite some time now. Indeed, 'Glint' was and still is an occasional favorite. By this point though, they've had me quite convinced that history goes in circles, especially in the case of power metal. My point is, this wouldn't have sounded out of place under Twilight Force, or, to trace it even more backwards, Rhapsody Of Fire. Even their members' attire gives off that Twilight Force vibe - I'm positive I've seen that costume on that elven assassin guitarist in the said band. Now, I've had my fair share of gimmick bands and, truth to be told, my capacity is at an end. So yeah, I was pretty relieved when I saw they'd used no alter ego on stage.

As far as the debut album goes, The Saberlight Chronicles is pretty solid. Admittedly, I was skeptical at the first track - that opening was as Disney as it can get, and I basically winced every time I hear that pump-up orchestra or those faintly annoying tinkling of bells. Then my opinion improved when it comes to the infectious chorus. Of course, seeing as Fellowship is another band hailing to the Golden Age, most compositing are along the line of their more fluffy and delicate Italian peers with an uncanny resemblance to Twilight Force. I don't really know whether or not that is a point that buggers me, but this LP is certainly growing on me. And they'd kept a strong and steady rhythm section that tickled my fancy, especially on the bridge and chorus in 'Hearts Upon The Hill', not to mention the overall impressive solos with their Freedom Call energy.

Mind, I'm not exactly what you would call a symphonic power metal fan, and Twilight Force's notorious sophomore release did not help to improve my impression of the said genre. But this one is good, this one may even merit an ''Excellent'' by my standards. The guitar sound is not drowned out by the orchestra - my usual complaint when it comes to symphonic stuff- 'Oaks And Ash' even achieved a certain amount of heaviness in the riff. The melodies attained all the flower virtues of the likes of Twilight Force and Majestica and the solos are as flourish and majestic as can be. There's a certain sense of fluency as well, since the hooks and occasional switch of drum patterns manage to draw my attention back everytime it wanders. As to the lyrics, they'd covered topics of unity and joining up to fight (or is it just fight?) and seeking glory... you know, the good ol' cheesy nonsense that is so characteristic of Dragonforce, which do look rather ridiculous on paper, but sounds extremely upbeat and glorious to one's ears. Even the repetitive line of ''And now I'm left fighting on my own'' in 'The Hours of Wintertime' was not as dreary as I'd feared (Aye, 'Reveries' scarred me for life). And I bet they're tons of fun live - I could just hear the crowd bellowing along ''All the scars and shrapnel wounds well they ache with every movement'' or ''For the saints beyond the river I will take another step''. Bonus points to the 9 min 'Avalon' with all its Rhapsody epicness.

Just one small complaint here. Even after my customary three spins I still find Matthew Corry's vocal works lacking a bit of power, a bit of pushing feeling that might've carried the choruses better. So the ballad 'Silhouette' had dragged down the whole dynamic of the album and and ruined the next song for me as well - hardly a surprise since I relied heavily on vocals to make ballads interesting. Still, not even Tommy Johansson was all that impressive back on his debut in Reinxeed, and Matthew may improve yet.

Normally, I prefer heavy/thrash power or the old school power metal that the Germans play so well, so I do judge most symphonic power metal harsher than necessary. By that light I am actually quite impressed with this release. I'll venture to say a new star has arisen in the genre and as long as they don't turn over much Disney, I'll have no reason to complain.

Note to self: I would definitely recommend this to several of my friends seeing as how many Twilight Force or Majestica fanboys and fangirl I'd known.

Highlights: 'Atlas', 'Oak And Ash', 'Scars And Shrapnel Wounds', 'Glint', 'The Saint Beyond The River'