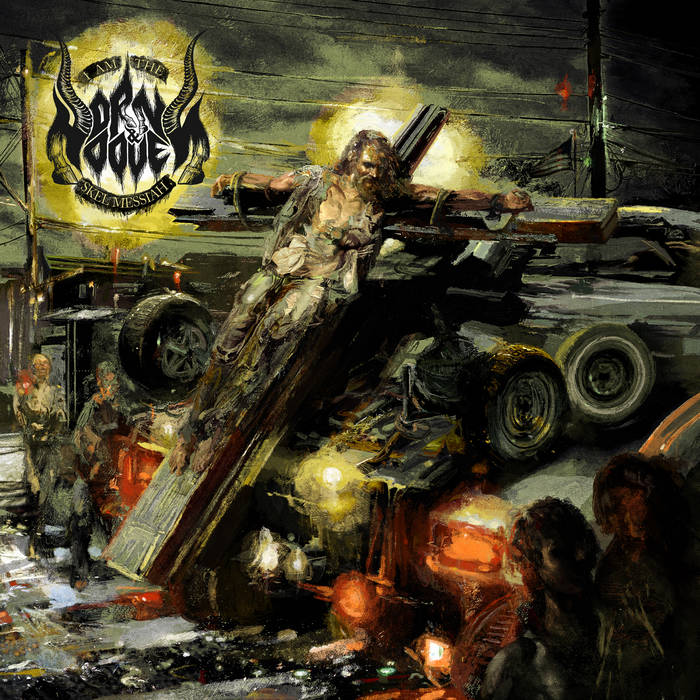 When it comes to extreme metal, New York is an interesting and very fertile “scene” of sorts. Many people would immediately think of slam death metal, and nowadays New York is mostly known for its avant-garde black metal scene. However, the Big Apple’s underground has had many blackened acts that eschew the avant-garde and overly technical bent for a more old school and vintage style, and that is certainly the case with the band Horns & Hooves and their devilishly deviant debut record I Am The Skel Messiah, released through Invictus Productions.

Horns & Hooves is the brainchild of vocalist and string violator Malebolge and multi-instrumentalist Salpsan, the latter being better known for the excellent band Spite, also from NYC. Originally formed in 2013, the band took its sweet time in unleashing their depraved brand of black metal in the form of a demo and EP in 2016 and 2017 respectively which turned a few heads of many underground enthusiasts, and after recruiting drummer Orobas, they brought this album. Horns & Hooves’ style of black metal is indeed very old school, with a very apparent thrash metal influence that’s also reminiscent of early Bathory and early Sodom, and that was certainly the case in their early tapes, being very fast and pounding, with a heavy emphasis of riffs and dry, rabbid, growling vocals, and while those characteristics are still present in I Am The Skel Messiah, the band have really pushed their sound to the next level, as well as carving their own unique sound.

The first thing I’ll say, which is both a disclaimer and it also bleeds into my one and only complain about this record, is the use of samples and the two interlude tracks, which is, this is a nasty and horny (pun intended) record, the album literally opens with gagging sounds which is up very unambiguous as to what kind of gagging that is. Now, the very deliberately sexual samples, references and overal tone the record has doesn’t bother me, in some areas its actually funny, but, they do make this record very, very Not Safe For Work, so my disclaimer would be to use headphones, otherwise you’re gonna get weird looks, and not just from listening to black metal. Which brings me to my complaint is the two interlude tracks, 'Amphetamines And Red Molochian Dreams (Prelude To Gooning)' and 'Narcanaanite (The Infernal Dose)', as preludes to their subsequent tracks they’re fine, and set the mood well, but at the same time, they’re just soundbites with dialogue and creepy synths, and given how aggressive and even dissonant the record is, these off-kilter and raunchy in-betweens kinda ruin the album’s pace, for me at least, and again, while I don’t mind the whole sex-in-the-sewer-dungeon, these two interludes alone make the album a must-listen-with-headphones, but I digress.

And with that out of the way, this record slays. The band’s first wave black metal sound is still present, but the band manage to have that thrash sound without the sound ever crossing into just black/thrash, the band accomplishes this with how they play their instruments and especially their songwriting. What keeps the record within the realm of black metal is the songwriting, as the songs have very repetitive and stripped down sections, with long dronning riffs and extended blast beats. On top of that, the music is very unorthodox, the long and repetitive sections are frequently off-set by complete shifts of pace or a very fast song has a bridge where the music slows down to a crawl or flat out stops for a hot second before the sonic mayhem resumes. Furthermore, the band have a very strong and adept sense of melody that keeps the record within black metal, but it also grants it that fresh and unique edge that most throwback black metal and blackened thrash bands often lack due to the overzealous focus on blistering speed, the melodicism, which is nevertheless dissonant and very much in line with modern black metal, while also being reminiscent of Greek black metal is what complete and refines the sound the band have in this record.

The band, also forgoes the standard verse-chorus-verse structure for the vocals,in favor of the music and their instrumentation carrying the lion’s share of repetition. On top of that, the music, for as acerbic and uncompromising it is, Horns & Hooves are masters of pacing, as each song has enough breathing room for each riff, melody and passage to be fully explored, this also applies for the guitar solos, which are very frequent, but also dynamic and very well placed, none of the solos Salpsan and Malebolge play feel haphazard or overlong. The vocals of Malebolge are also very evenly spread and are appropriately manic, the dude manages to switch between gritty dry howls, strained screeches, guttural grunts and even King Diamond style wailing, moaned spoken word and doom metalish singing, and it all blends and meshes perfectly. Furthermore, the band’s songwriting and overall performances boost the quality and enjoyment, Malebolge and Salpsan had already displayed excellent chemistry, and newcomer Orobas is not only an excellent drummer in his own right, he fits the band like a glove. Overall each member and the various elements they bring into this album is a complete and fully realized package, and with the exception of the interlude, every song is a banger, and as a whole its consistent in tone and quality from beginning to end. The major highlights and a true display of how dynamic and skilled Horns & Hooves are, are the songs 'A Wailing, And A Weeping, And A Busting Ov Cheeks' and the title track, as the band aren’t just good with speed and brutality, they’re also good with slow burners and mid-pace, which seamlessly transition back into aggression, and that to me, is the sign of true talent, since they managed to overcome the biggest shortcoming of extreme metal, which is being monotonous and one-note.

All in all, Horns & Hooves are that rare hidden gem that manages to embrace and honor the past, while also pushing the envelope in their own wickedly deviant way. I highly recommend anyone who enjoys black metal to give this record a spin, although and again, I recommend using headphones.

Best tracks: 'Baphomet In Steel', 'Blasphemic Gooning', 'A Wailing, And A Weeping, And A Busting Ov Cheeks', 'I Am The Skel Messiah'