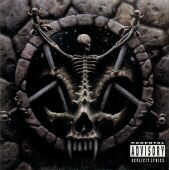 Divine Intervention was the sixth full-length of Slayer and at the same time the last album that could be easily associated with their fantastic early works. The band had not moved into modern times yet. Quite the contrary, it almost appeared as a return to the roots. The musical approach was closer to Reign In Blood than to the successors of this unique masterpiece. For example, the short outburst 'Sex. Murder. Art.' was an indication for this thesis, not only because of its brevity. The riffing and the songwriting pattern were well comparable with their classics such as 'Piece By Piece' or 'Necrophobic'. Kerry King had been the main songwriter on the here presented album and he had not forgotten the success formula of Reign In Blood. To mention an other example, the rapid 'Dittohead' also referred to their legendary third album. In contrast, the title track went into the somewhat more leisurely direction of 'Seasons In The Abyss', at least the guitar licks at the beginning.

However, Slayer offered one more time a musical assault that took no prisoners, although the magic of their early outputs remained unrivaled. Maybe this was just because of this special moment of surprise that was missing. As written above, you could more or less easily define the predecessors of most of the here presented tracks. The same went for the lyrics. For example, 'SS-3' dealt once again with a historical person (Reinhard Heydrich) of the Nazi regime. These repetitions had not occurred during their first three albums. This made a small but fine difference. I do not want to be malicious, but Reign In Blood was the original and Divine Intervention marked its afterburner. One could therefore confidently notice that the latter fought a losing battle. This applied even in view of the circumstance, that the production team, consisting of Slayer, Rick Rubin and Toby Wright, had done a good job. But they had not worked flawlessly. The guitars should have been a tiny bit more powerful. The solos do not lack of intensity, but the guitar lines do not sound voluminous. Some might say that they have to be described as inoffensive, but I would not take it quite that far. From my point of view, the guitar sound was good, but not outstanding.

It was quite certain that all band members were fully engaged. The vocal performance of Tom Araya was well without achieving the brilliance of the early records, in particular that of Hell Awaits. Paul Bostaph was a suitable substitute for Dave Lombardo, but it goes without saying that we would have preferred the incredible drumming of Dave. Once again, it was the question of original and (good) copy. However, the band was still capable of performing stirring thrash metal. My personal favourite was the furious 'Circle Of Beliefs' because of its unbridled power. Due to its forceful beginning, it drew me under its spell from the first moment onwards. The second crusher was called 'Mind Control'. While being straightforward as a torpedo, it finished the album ruthlessly.

It would be an exaggeration to say that a stale aftertaste remained after listening to this record. Due to their previous outputs, the bar was just set too high. I am convinced that the band had used its best endeavours in order to fulfill the request of their fans. But it was just impossible for the group to achieve a better result. From this perspective, Divine Intervention made my day.

The early 90’s officially marked the end of the tremendous commercial success of thrash metal. The explosions of the 1990 masterpieces: Painkiller, Rust In Peace, Seasons In Yhe Abyss, Arise etc. died out as fast as they grew. Each metal giant now faced a choice. Metallica, Megadeth and Iron Maiden were taking the lighter and more melodic path, Sepultura was getting accustomed to the commercial nu-metal style with "Roots", and others like Testament went for the more extreme paths of death metal. Slayer, on the other hand seemed to keep their style more or less exactly the same as on the previous album. Did the "tried & true" method work?

Hell no. What were they thinking? Divine Intervention is one of the weakest Slayer releases ever. The album, while faster and more aggressive, seems like a second rate rehash of the Seasons In The Abyss material, with the faintest hint of punk. The guitar is really distorted and it’s hard to make out the riffs. The solos are the usual short and pointless King/Hanneman crap. I don’t think they’re ever the same twice, if you know what I mean. The lead guitar, however, has a nice sound and there is some really cool melody to be found here, most notably on the title track and "213".

All the songs seem lifeless and monotonous and it’s really hard to tell them apart. Tom Araya’s voice alters very little throughout the disc and he’s changed his style from the spoken-word form from "Seasons..." to a somewhat annoying deafening scream. There’s seemingly nothing different with King and Hanneman’s playing, but the new drummer, Paul Bostaph, is just amazing and breathes a bit of life into the otherwise boring album.

Bottom Line: It’s not a CD you wanna listen to again and again.