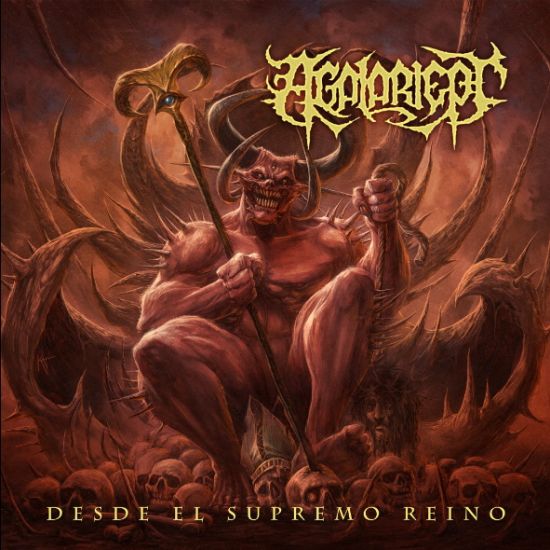 Hailing from the city of Caldera, Chile, Agalariept is a death metal band that has been active for over 10 years at the time of this writing. The band's first release was a full-length titled Jugando A Ser Dios in 2016. A record that I personally despise and have not been shy to express this countless times ever since that album was released. With a sub-par production, barely average vocals and (at best) mediocre riffs, it was a sorry excuse for an independent death metal record (which I personally consider a glorified EP). Despite what I may think of the product, it made the band very well-known in the scene and were invited to play countless times. By 2019, they started working on their second full-length and eventually, the band went in complete silence regarding this new record.

Of course, this can be attributed to the pandemic that struck the world in 2020, but there was barely any news regarding the band or the work they were doing. There were some singles published during this period of almost complete silence, and I noted that there were improvements in the sound but barely anything else beyond that. In late 2021, due to circumstances that need not be explained here, I received the entire album for download from one of the band members (who's a close friend of mine). The name was Desde El Supremo Reino and I decided to listen to it, half expecting the album to be a slight improvement of the same boring musicianship of their previous album. And at that moment, I was at a loss for words.

In the same way that "Slaughter Of The Soul" represents a complete stylistic shift for At The Gates, Desde El Supremo Reino signifies the same for Agalariept. Opening with the instrumental 'Inframundo', this track serves the purpose of introducing both the new members of the band and their new sound. A sound that is so far beyond what the band had done in the past, it feels like you are listening to a completely different band altogether. In many ways this is the case, as many of the original members left the band years ago and only Jonathan (vocals) and Jose Soto (guitars) are the only original members left. Inducted into the band are new members Carlos Carrizo (guitars), Victoria Lopez (bass) and Felipe Ruz who, despite being credited as the drummer for the album, actually joined the band after the recording was completed. With this new line-up established, we are presented with a monstrous sound, dripping with technical guitarwork and demolishing drums. In less than 1:30 minutes, 'Inframundo' demolishes their previous album in its entirety, paving the road for this new cacophony of obliteration.

After this brief introduction, no second is wasted in the following tracks. Brutality ensues constantly and there is not a single moment where it seems that it will subdue. Soto & Carrizo display their skills in chaotic and technical riffs played as tight as possible. Soto's leads are wonderful and made for the songs rather than being a wankery showfest, which is something I welcome. Victoria's skills are commendable as well, as she is a proficient player whom I've seen improve over the years. Despite the mixing not making her presence very clear (as it happens in extreme metal), you can still trust that her playing is as tight as her fellow comrades. She, alongside Carrizo, is also responsible for songwriting and arrangements, with at least a couple of tracks being co-written by Victoria. The drums in this album, as stated previously, were not recorded by Felipe Ruz. Instead, session drummer Marcelo Power (of the legendary Chilean band Homicide) was in charge of the drums. He absolutely pulverizes the drum kit, with constant blast-beats and abrupt time changes while never even for a second letting it up. And last but not least, the vocals. Jonathan has improved to such a degree from the first album that, at first listen, it is unrecognizable. His delivery is on par with Glen Benton's performance in Vital Remains's "Dechristianze". Demonic growls and deafening shrieks intertwined with each other in perfect harmony. Singing praises to the demonic kingdoms below and acts of the unspeakable on human corpses.

The album is well-mixed and the intensity of the music is constant while always introducing something new, barely repeating themselves in each track (though the tracks themselves have a bit of repetition). Despite all of the album being a beast, track 8 is the weak link of the record, with a forgettable riff that sounds off-place in this record. Aside from that and some minor lyrical inconsistencies, the 6-year wait for this album was entirely worth it (not least of which because it was recorded twice, with the original recordings being discarded by the band). This record signifies a rebirth for this band and established Agalariept as a fearsome tech-death band that has set a new standard for death metal in Atacama, and to which every subsequent work will be measured against. It is a work that was rehearsed to death, recorded tightly and given an appropriate sound worthy of the music. While my opinion regarding their first album still sands, this new album is one of my favorites and has earned them a new fan. If you like Suffocation, Bloodbath and vocals a la "Dechristianize", then this is a must-have for you.