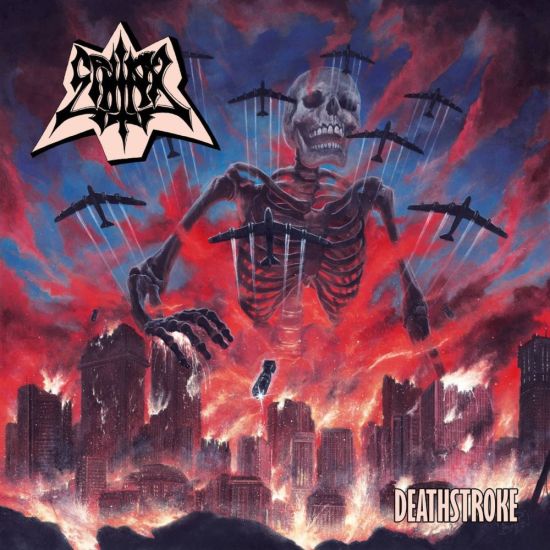 Once I have read a wise sentence. A metal lunatic whose name I have forgotten said that he is no fan of a band, but a fan of single albums. I guess this approach makes fan lives much easier. “Diabolus In Musica” sucks? No problem, dude, I am only a fan of “Hell Awaits”. Ha! But I should give you another example in order to come closer to the musical approach of Sphinx. “Renewal” is a pile of shit? You are right, but I keep smiling. I only love “Endless Pain”.

Sphinx present an album that wants to be the legitimate successor of Kreator’s debut. Even “Pleasure To Kill” is almost a high-sophisticated piece of music in comparison to Deathstroke. But that’s okay, because Kreator’s second work had a greater influence on the global scene, but “Endless Pain” also left its mark impressively. And so the motto is full speed ahead. Snotty vocals ask to dance in interplay with sawing guitars and arrow-quick drums. Honestly speaking, already the artwork speaks volumes and most of you will know what is to expect when it comes to tunes with names like 'Ruthless Power', 'Deadly Speed' or 'Pounding Death'. That's probably what songs on the next Mantas demos would have been called, if they hadn't renamed themselves Death. But let’s forget Chuck Schuldiner (R.I.P.). Even at the beginning of his much too short life, he was almost a technocrat compared with the trio here.

A fixation on the very early Kreator does not exclude medium-fast passages. Just remember the mighty beginning of “Storm Of The Beast”. Yet it goes without saying that Sphinx usually attack mercilessly. This also explains the relatively short playing time of the vinyl. Here, the full energy is used in the shortest possible time. Thus the 32 minutes fly by and every additional second would be one too many.

Aggressor shines with a Sven Flügge memory hairstyle (Deathrow drummer, see the picture on the back of “Riders Of Doom” - or is it the one of Milo on the back of “Raging Steel”?). He is responsible for bass and vocals, but he is a generous guy. He allows his comrades Terrorizer and Bonebreaker (is this about another sign of a little preference for Kreator?) to sing a song. Bonebreaker lends 'Deadly Speed' his voice, Terrorizer screams on "World Downfall", ups, of course 'Pounding Death'. If now some dolt thinks that this confusion at the microphone would lead to a plus in variety, this is of course wrong. All three gentlemen have a very sonorous, well-sounding voice - or exactly the opposite of it. Anyway, the endless fury, the diabolic speed and the raw energy have an impact and I ask myself what will be the name of the band that completes the “Endless Pain / Deathstroke / -to be defined-“ trilogy in the year 2059. It always seems to take 37 years until something new comes along, but I will inform you – I am then only 90 years old.

Until then I enjoy merciless steamrollers like 'Ruthless Power', 'Exterminator' or (the almost historically valuable) 'Masssacre Of Distomo'. These songs as well as the remaining material benefit from a dirty yet vigorous production and so I come to the conclusion that we do not have any serious flaws on this record (the anaemic intro and the silly outro aside). Of course, the entire album does not deliver anyhing new and even the fact that you should contact the band via an address in Gelsenkirchen (hometown of Tom Angelripper) has parodic features. But come on, this is Teutonic thrash the way it should be – and this alone makes Deathstroke recommendable.