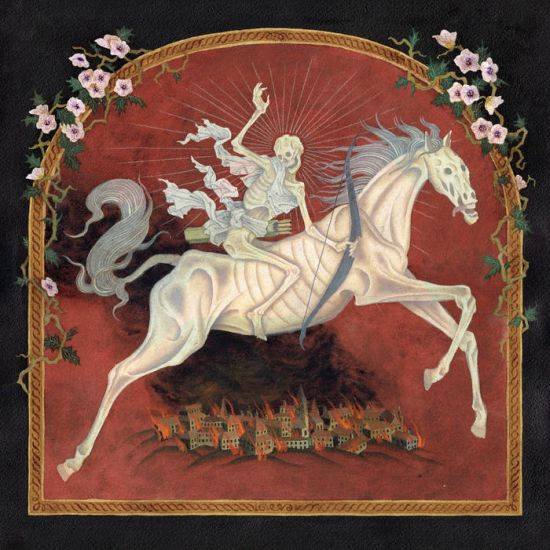 There's been a very consistent surge of American black metal in recent years and seemingly with the intent of completely breaking away from the whole "blackgaze" trend of the early 2010's. There's also the return of some of the greats of USBM, like the mighty Negative Plane, and speaking of Negative Plane, today we have a band, that if you're like me and was floored and enraptured by Negative Plane's newest masterpiece, then Predatory Light is certainly the black metal band for you. After 6 years these mad lads from Santa Fe, New Mexico and Seattle Washington return with their sophomore record, Death And The Twilight Hours, released through 20 Buck Spin.

Predatory Light formed in 2011 and after some demos and a split they unleashed their self-titled debut wherein the band displayed a style of black metal, not unlike Negative Plane, albeit with a more overt doom laden sound and surprisingly catchy hooks, which considering all of the members are also on death metal outfit Superstition, makes sense. However, the band are more than just a Negative Plane clone, and certainly more than a Mortuary Drape worship band for that matter as well, and with Death And The Twilight Hours, they certainly prove that.

The most striking aspect is of course the riffs and very vintage sounding melodies and hooks. The band are classified as a "black doom metal act" and while in many areas that is an appropriate description, to call Predatory Light a doom metal band would be a bit misleading as the band’s style isn't completely atmospheric or sludgy. The songs, while fairly long are firmly rooted in black metal, particularly the drumming of D.M. and the vocals of L.S.; the former going all through his kit with blast beats and trad metal fills and rhythms, while the latter expertly adapts his dry death growls to fit this style of black metal. However, the standouts are of course the strings; guitars in particular lead each and every song, with the bass as the support and complement, K.M., L.S. and D.J. successfully command your attention in each song with their riffs, and the guitars are definitely where you can hear the doom influence (the vintage sound and tone) which coupled with L.S.'s vocals and D.M.'s dynamic drumming create a very ghastly and occult atmosphere with a very 70's inspired technicality that harkens to of course Black Sabbath, Blue Öyster Cult and also vintage prog rock and American doom titans Trouble and Pentagram. All of that without the band having to slow down or drastically change the pace of their songs, and more impressively the band pack a lot, in a respectably brief package, 4 songs of over 10 and 6 minutes with zero filler or padding.

That being said, while brevity and being straightforward has its strengths, you’re also left wanting more, and sure, you can go back to their debut, but this new album is a widely different beast, with more refinement and focus, while the previous record was more raw and experimental. Furthermore, while I do mean that the band are more than a clone or worship band, the influences to early South American and South European black metal are very present and overt in some areas. I wouldn't consider the short length and how they wear their influences as a deal breaker, since Predatory Light aren’t copying or recycling sounds, but hearkening to it, but these are some aspects worth noting, since many metalheads, especially those versed in the underground outside of Scandinavia, might not be as forgiving or enthusiastic but I digress.

Overall, Predatory Light have certainly delivered a worthwhile record that distills and enshrines an often overlooked style of black metal in the modern era, not groundbreaking but a good time regardless. Especially if you're a fan of Negative Plane or Mortuary Drape.

Best songs: 'Wracked By Sacred Fires', 'Death And The Twilight Hours', 'To Plead Like Angels'