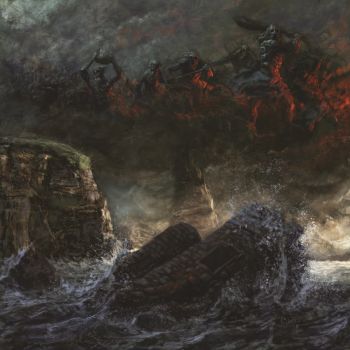 I’ve said it before and I’ll say it again, the OSDM trend while having many good bands, certainly got old fast due to the overabundance and saturation of early 90’s inspired bands, but at the same time, the death metal underground managed to thrive and expand in more unique ways. Thanks to underground stalwarts Invictus Productions, we have the debut album of Irish cult Coscradh, titled Nahanagan Stadial coming out August 5th, 2022.

Coscradh (which is old Irish for roughly, ‘triumph in slaughter’ according to Metallum) are indeed a death metal band but with very bestial and blackened leanings, and unlike many other bands, their lyrical themes are rooted in Irish ancestry, to the point where they actually sing in Old Irish, which definitely grants them a layer of incaccesibility, to boot with their punishing style of black/death metal. After a couple of EPs released through Invictus, the band have finally released their debut and what a debut album it is. The band definitely qualifies for the black/death label but this album is beyond labels.

For starters, the record leans more into death metal extremity, the murky and thick atmosphere of the strings, the pounding and reverb tinged drums, and the maniacal death growls will please any fan of the extreme, but the biggest takeaway of this record is how old school yet off-kilter the music is. What do I mean by that? In a track like ‘Plagues Of Knowth’ the band manage to perfectly blend Blasphemy inspired brutality and speed, with old school death metal riffs, furthermore, aside from the bouts of pure extreme metal, the band also manage to experiment to dissonant noise soundscapes as a way to create ambiance and atmosphere, setting the mood or as a bridge between songs. The opening title track ‘Nahanagan Stadial’ succeeds in creating an eerie sense of dread before bursting into pure metal.

Overall where the band succeed the most is in using death and black metal as a foundation; while adding, bending and mixing various disparate elements and sounds to create an utterly demented opus to the darkest and most chaotic corners of Irish history and prehistory, and I definitely have to praise all the members as a dense and chaotic record like this, that is also a cohesive whole in the sum of its widely varied parts. Guitarists Ciarán Ó Críodáin and Jason Keane are the obvious standouts in terms of first impressions as their chaotic shredding carries the album in its entirety, but I also have to give major props to drummer Boban Bubnjar and Hick O Aodha as it is the percussions and low end what truly make this album sound so boundless and immense. The sense of overwhelming darkness and terror is the accomplishment of the band as a unit, but the vocals of Ciarán Ó Críodáin, (as well as the backing vocals of Hick O Aodha and Jason Keane) in some twisted and bizarre way, manage to make sense of this whole cacophonous symphony, which is ironic since his vocals are dry gutturals and unhinged wails in Old Irish. The final track, ‘Feallaire Dóite’ in particular works as a perfect encapsulation of the entire album, and it closes with the album in a supremely chaotic and disturbing fashion. My only minor critique is how all the tracks are tied together, and as such, this is an album that needs to be listened with attention, as it won’t wait a second for the listener to catch up, not to detract anything from the band, but it is something worth noticing all the same.

In conclusion, Coscradh are an Eldritch entity that made the best record they possibly could as their debut and in many ways, it feels like the precipice of extreme metal and they’re just getting started. However, be warned, as this album is purposely inaccessible for the uninitiated, while I do highly recommend it, if you’re not familiar with the murky and dissonant style of death metal, nor the extremity of bestial black metal, this album will decimate you in an onslaught of sonic terror.