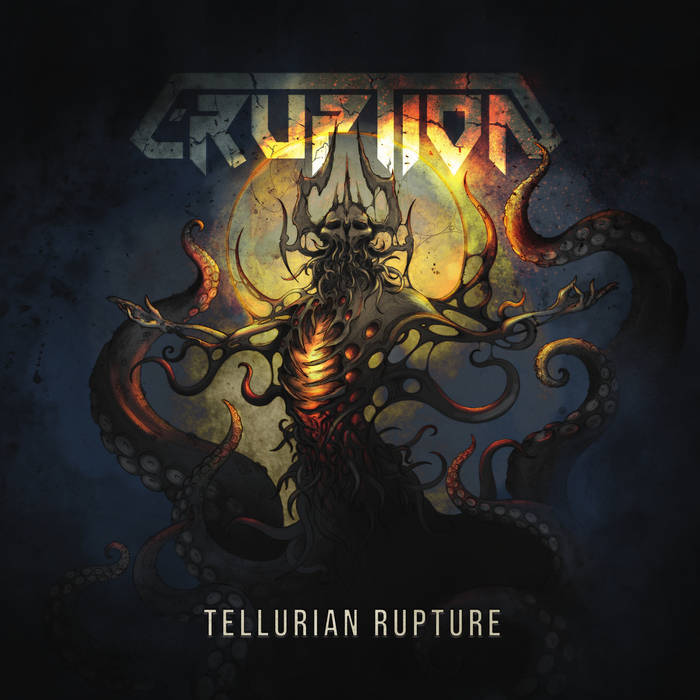 The combination of speed, power and thrash metal has become a rare species. But some intrepid idealists still wave the flag of this style. This introduction brings me straight to Eruption, four boys and a girl from Ljubljana, Slovenia. By the way, speaking of a girl and Ljubljana: did you know that my love lock hangs on a bridge in Ljubljana above the Ljubljanica? No, the names on this lock are not Felix & Eruption, that would be too much of a tribute (and pretty infantile as well). Of course, instead of “Eruption” you can read the beautiful name of the loveliest girl, it is J… But I digress, let’s come to the fantastic release called Tellurian Rupture.

Eruption have already shown their ability to write exceptionally good songs. 'Drones', the best track from Cloak Of Oblivion still casts its spell over me. Its successor in terms of quality, excitement and compositional grandeur bears the name 'Worms'. (Of course, this is no track about the eponymous German town…). 'Worms' prepares the listener a feast of outstanding vocals, the most precise riffs you can get, great solos and an excellent rhythm section. The “Shying away from the blame” bridge delivers a warm, melodic contrast to the sharp guitars that dominate the other parts with the effect that the listener gets the best of both worlds. Sanctuary, classic Agent Steel and other influencing factors would have been happy to have this song in their own portfolio. And that’s not all, 'Coffin Bred' is a similarly constructed piece with a lot of speed and energy.

Eruption sound traditional yet fresh. They do not shy away from classically rasping speed metal guitar ('Gone With The Floods'), but there is not even the finest layer of dust on this performance. Sometimes the music lies in close proximity to that of modern Artillery. That’s pretty cool, because the Danes have also proven their ability to serve a meal made to grandma's recipe nice and crunchy. (Guess this is no wonder, because some of the guys from Kopenhagen are indeed grandpas.) The songs on the late positions (seven to ten) of Eruption’s new output with their band-typical compositions do not stand in the shadow of the album’s first part. Maybe they are even better, because the quintet shows little signs of weakness in the centre of their full-length. 'Praise The Serpent Queen', equipped with a monumental playtime of nearly eight minutes, fails to impress me. I do not say that this track, a kind of power ballad, is kitschy. Nevertheless, ten percent less tragedy and bombast would have been nice. My simple mind prefers less sophisticated yet still exciting and compact pieces like 'Maternal Foundry' (earworm alarm!) – and the closing (quasi) title track also does not lack steam. Finally, I must mention once again 'Gone With The Floods', another speedy colleague that connects energy with the right quantum of melody.

Production-wise, Tellurian Rupture leaves nothing to be desired. It scores with the perfect degree of aggression and directness, it sets the focus on transparency, but it is far away from falling victim to sterility. Anyway, due to the strong material (including intelligent and metaphorical lyrics), you can take one thing for granted: even a less convincing mix would be no problem, because in view of this album, it is no wonder that “love” is an integral part of S-love-nia. The passion and the dedication of the musicians for their material is both obvious and omnipresent. Not to mention my love lock over the river in Ljubljana. It alone justifies the “love” in Slovenia.

PS: If Eruption want to release a single with 'Drones' and 'Worms' - I wouldn't buy it. But I would definitely write a 100% review for it!