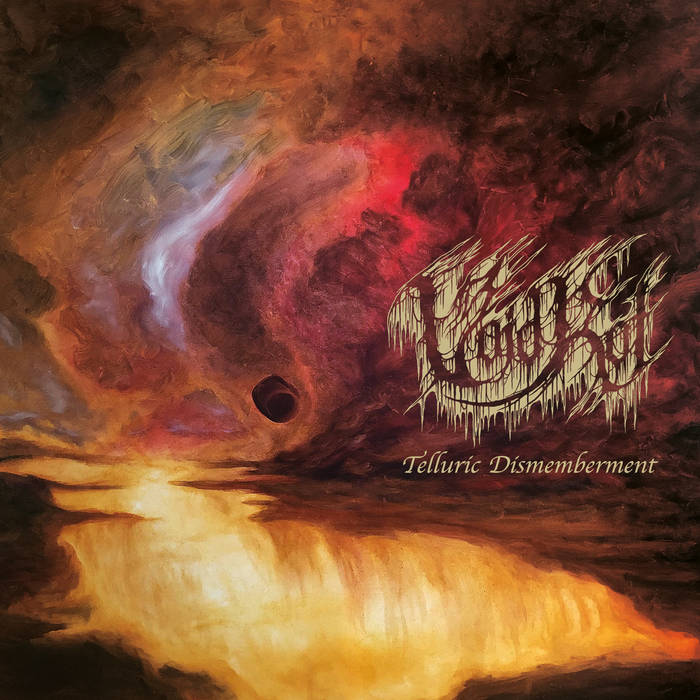 Among the whole OSDM, death-doom has also had something of a revival recently, and one of the bands that people are paying attention to is Void Rot. In 2020 they released a very compelling debut, and in 2022, they decided to release an EP Telluric Dismemberment, through Everlasting Spew Records.

In general, EP's tend to be very brief, usually a couple of new songs, or tracks that were left off an album. For Void Rot's latest offering, it's even briefer. 1 new song, 1 cover, and a handful of live tracks for the CD and digital releases, and that's actually my major issue with this EP. Live albums in general tend to be hit or miss, be it because of production or performance. Luckily, Void Rot's live tracks suffer from neither, so there's at least that. Though, again, outside of the initial impression of hearing Void Rot live on record, I could just listen to the album, but I digress. Covers can also be hit or miss, mainly because there's a risk of sticking too close to the original or changing it too much. For Void Rot, they kinda fall on the former, but to their credit, their production style and much more cavernous sound works well for early Amorphis, so it's not really a case of hollow recreation, but rather a loving tribute and they certainly succeed there.

That brings me to the real meat in this release which is the title track. Now as stated, Void Rot are a death-doom band. A really good death-doom band and they more than proved their skill with their debut. On the new track they still display their mastery of desolate and murky atmosphere, thick and lumbering riffs, and demonically echoing vocals. All in all, a worthy new addition, if not much else, but then again, this track does have two significant differences with the songs in their debut, primarily in terms of tone and style. The band still have that evil and engrossing Incantation styled sound, but this track is much groovier and atmospheric, and the atmosphere have a blackened quality to it, especially in the end riffs from their debut which heavily leaned into the eldritch and overwhelming side of death-doom. So, if anything, it's a teaser for what the band will do next and that's worth praising overall, even if it's just one song.

Overall, Void Rot are still doing what they do best, and show glimpses of their future. A neat little in-between that's very enjoyable albeit somewhat inessential, due to it being really just one track, but a really good track regardless.