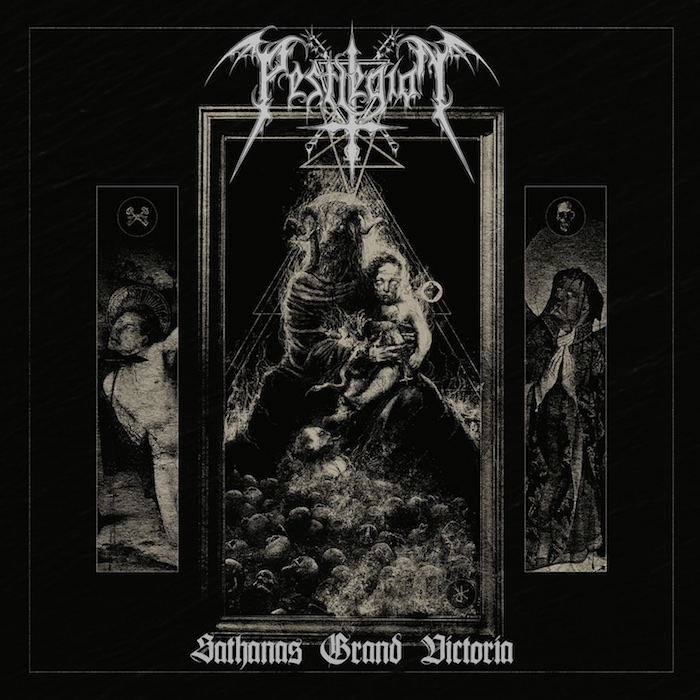 All right, I'll admit it at the outset. The intro to Sathanas Grand Victoria sounds so bombastically overloaded as if Dani Filth and Shagrath had met for a five-course meal (although they get the shits after three plates at the latest). But Osmose is a synonym for “no shit releases”, at least if we cover the cloak of silence over outputs like Diabolos Rising and comparable nonsense. Either way, Pestlegion escape from their self-created opulence as soon as the first regular track sets in. The mercilessly hammering 'We Deny Thy Name' sounds like a homage to Grabak at times of “Agash Daeva”. German black metal has its own nuances and Pestlegion cannot hide their origin. But extreme velocity is always welcome and therefore further eruptions of high speed like the very robust 'Into The Golden Valley' enrich my listening experience.

Pestlegion deliver their kind of blackness in a very precise form. Some of the high speed sequences almost fall victim to a clinical sterility, but thanks to Satan, Luzifer or Beelzebub, the iron fist of black metal always gains the upper hand at the end. Slightly more problematic are a few of the less strict parts, for example the instrumental and narrative sections of the title track. The song meanders aimlessly, the stereotyped narrator has been heard a thousand times before and both intensity and obsession are missing here. By contrast, the nagging vocals that dominate the album are well done and give the whole thing a proper flavour. By the way, the production also deserves the attribute “proper”. It finds the balance between sharp transparency and the necessary amount of hateful misanthropy. The guitars appear as ice crystals and give the entire album a pretty cold basic mood.

I cannot say that each and every track blows me away in a matter of seconds, but first of all, I appreciate the devotion of the band for the sub-genre and I have no doubts concerning their authenticity. Moreover, I like the fact that the band does not run out of ideas. Quite the opposite, the closer 'The Warlock’s Curse' is among the best pieces and before anyone holds their breath: the song is not about Doro Pesch and she was not allowed to sing along either. It conveys a gloomy yet profoundly heavy mood and a genre-typical melody appears even in its fastest parts. The song is a close relative to the epic 'The Portal'. Its six minutes interrupt the outbursts of insane vehemence and give an indication of the relative versatility of the artists. Summing up, Sathanas Grand Victoria is neither innovative nor outstanding in delivering the old school, but it creates diabolic delight, not always, but often enough for a 7.5 rating.