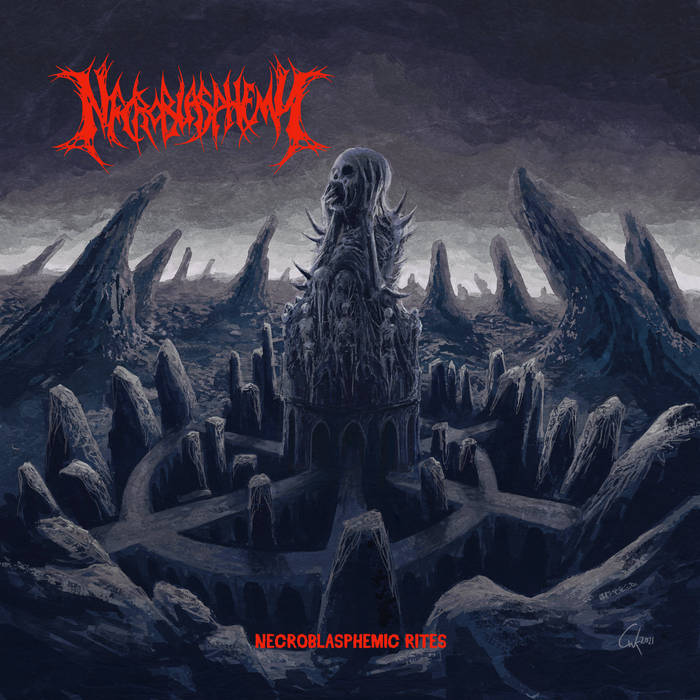 Upon first seeing that their name is Necroblasphemy, the first thing I thought was: "Yep, that's gonna be war metal, alright." Shows what I know, because it turned out I was dead wrong, because war metal is not what this sturdy German death metal unit has to offer. This album compiles both of the band's demos, and I'll admit that it's an entertaining ride.

Instead of Conqueror or Blasphemy-styled detonations, Necroblasphemy dabble in a form of heavy and varied death metal, kinda like what bands such as Infester, Baphomet/Banished, Incantation and Brutality delivered in the beginning of the 90's, with some traces of Morbid Angel injected as well. The band delivers dark, suffocating and down-tuned death metal, not afraid to let twisted melodies seep into the fold here and there, with low growling vocals belching out undecipherable lyrics over tempos that can go from blasting mania to slow creepiness and back again. This firmly puts Necroblasphemy between kindred spirits such as Funebrarum, Undergang and Disma, just to name-check a few in this pretty crowded scene. They deliver the goods in a very agreeable manner, with the overall execution being well above the average. My favorite track on here has got to be '7 Flaws', where some well-placed dissonance gives the song somewhat of a black metal flavor.

As stated above, this is a compilation of their two demos, and you can hear that in the demo quality of the production, which leaves some to be desired. In my opinion the guitars and bass could have used more room in the mix, because they are somewhat buried now, and that sucks some of the power out of the music. Not that this is a huge problem though, the music is convincing enough to make up for this. Another thing I can't shake is that the vocals could use some more variation. Vocalist Patrick primarily utilizes a low grunt that he occasionally intersperses with a more snarling approach, and I think this aspect could be used more throughout. These small things aside, this is already a pretty convincing effort by a band that understands very well what they are doing.

In short: this is a good offering of dark death metal, that promises quite some for what's to come in the (hopefully) near future.