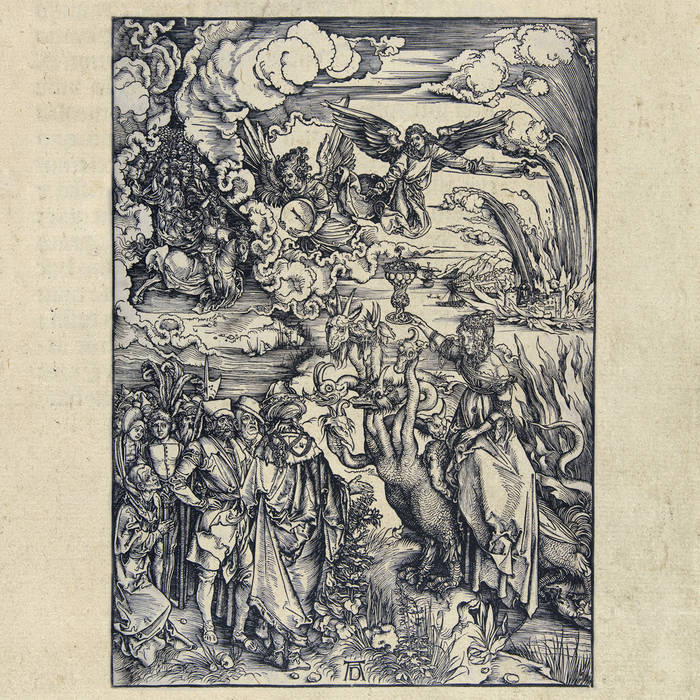 Progressive music navigates not only different types of musical genres but also conveys emotions, landscapes, and atmospheres. That’s the case of Swords Of Dis's newest work, released last year in October. I feel like it casts an aura of darkness from different fronts; songwriting, production, and instrumentation (mostly vocals and guitars).

Cor Mundum Crea In Me, Sanctum Ignis is a short EP that consistently demonstrates how you can merge a variety of musical inspirations and atmospheres to create a unique piece of dark art. The fact that the EP is short does not mean is not worthwhile, on the contrary, I found it highly engaging and enjoyable. The first track, 'The Great Suppurating Wound Of Dissension', starts the EP with a somber tone, the fire that purifies humanity from their double face morals and marks a new beginning. It is an instrumental track and builds a great sense of anticipation for what’s to come. Next, we have the title track and oh I was mesmerized by this song. Vocals resemble Attila Csihar from Mayhem, it was surprising how Alice detaches herself from her humanity and creates this otherworldly character that can deliver such a demonic register. Swords Of Dis music changes gears in unexpected ways, at the beginning of the track the drums blast in a black metal fashion but by the middle of the song the atmosphere gets into a doomy and solemn feeling. The transitions between styles are smooth and fit the overall atmosphere like a glove. The third track, 'Moonlight Illumes Thee', is again another change in the EP’s mood. It begins with a cleaner vocal approach mixed with a more guttural grunt. The drums blast and the guitars sound dissonant creating a perfect and harmonious cacophony. It seems like the band creates some kind of disagreement with the instruments but anyhow works in their favor to create a strange and unique song-writing. The song ends with some fire/flames effect and it serves as a bridge for the final track, 'In The Fires Of Man, We Are Destroyed', the tune that closes the EP. Yet another instrumental track that generates more cohesion between the previous songs and closes the experience with the feeling of being purified both body and soul.

The overall impression of listening to Cor Mundum Crea In Me, Sanctum Ignis was unique and at the same time, you know that music is an endless circle of influences that are interpreted differently depending on your mood. You know that you can relate passages of music and vocals to other musical references, however, what fascinated me was the way those passages were performed by these talented musicians. Variations between black and doom metal along with the impressive occult atmosphere were the elements that I can highlight in this EP. Highly recommended.

Swords Of Dis is a doom/black metal band from Birmingham, and it consists only of two members – Richard (multi-instrumentalist) and Alice (vocals) Corvinus. Hailing back from 2009, they have released one full-length album Tides Of Malediction four years later, and now, after eight years of oblivion they have returned with brand new EP Cor Mundum Crea In Me, Sanctum Ignis, released by Dark Temple Records. And though it’s not so easy to fully assess what expects us on the next LP (hopefully there won’t be such big gaps), regardless, we’ve got a glimpse of creative ideas and working methods of Swords Of Dis’ inner world.

But what lies between intro and outro, is much more expressive and original. Both songs are divided into certain rhythmic structures – some are traditionally built and are inclined towards one of the stylistic direction (black or doom), but some are peculiarly dissonant and atypical. And of course the psychedelic vibes overwhelm you in depressive gusts of horror. Self-titled 'Cor Mundum Crea In Me, Sanctum Ignis' is an epitome of madness and a journey into subconscious labyrinths of our fears. Yes, it’s amazingly disharmonic even in the context of experimental music, but nonetheless it still sounds relatively holistic. Classical doom metal passage at the end hints on kind of traditional rules, meanwhile raw black metal elements return us back to the primitive, when rawness and aggression take the lead roles.

Peaceful acoustic beginning on 'Moonlight Illumes Thee' shows the relaxing notes, and with the angelic voice of Alice it even smooths away the oppressing heaviness. But her oblique and distant manner of singing can’t break through this suppressed mire of despair. It seems like an angel of light has decided to visit some old friends in Hell, and her presence is noticed, but it can’t change the hell’s rules and primal needs for infinite tortuous agonies. It’s very interesting duet when she as a detached and sacrosanct creature opposes the violent and devastating screams of hellish creature.

Their fondness for occultism and religious dogmas is very strong; the songs are soaked in ritualistic atmosphere and the chants in Latin only highlight this special clandestine mystic spirit. Artwork is also a part of this conceptual theological world and with some medieval vibes. The sound isn’t perfect on this record, but the bands who worship raw black metal’s principles often contaminate the general sound, making it closer to old underground traditions. So, primitive, raw, traditional, psychedelic or disharmonic, it doesn’t matter, this music is full of these traits, and this mélange of various emotions and musical experiments also bestows upon them a touch of their own uniqueness.