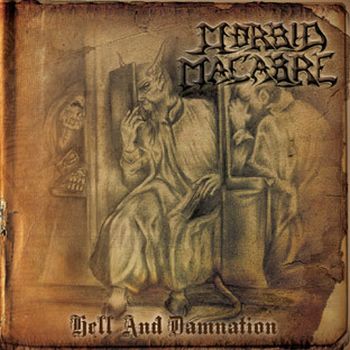 Behold the debut offering from the old school death metal side project Morbid Macabre of Alex Okendo, the front-man of Masacre and living legend of the Colombian metal scene. At first, I thought I was going to get a Masacre copycat, but soon I realized I was dead wrong. When comparing this debut record to Okendo's main musical project, I discovered a rawer-sounding death metal. Hell and Damnation is a homage to old-school South American metal acts like Sarcofago, Parabellum, and Blasfemia. The feeling you get is just evil, blasphemy, and rawness.

Hell and Damnation is a compendium of 9 tracks that are full of hatred and hostility towards all things holy and religious. The lyrics are committed to denouncing religion’s crimes against humanity, the hypocritical double face that has ruined the planet a long time ago. For instance, title tracks like "Blasphemy Religious", "The Truth of Your Lies", and "Pray You Damned" make my point clear. The tracks in general are aggressive, fast-tempo death metal bangers that worship the roots of evil South American metal. As mentioned before, Sarcofago and some (Medellin) early metal bands are the ones who influenced the band's ill-disposed sound. They are not re-inventing the wheel of death metal with their first record; they just want to reverence their metal gods and do it properly.

The vocal range that Alex uses in this specific record has many variants and interesting textures. You can find his typical death growls; however, he vomits some abominable high-pitched screams like at the beginning of the song, "Your Fucking Church." That infernal falsetto would make Kind Diamond proud. His voice is raspier and more cavernous than in Masacre, so, that fact makes the line clear between the two bands, and you can differentiate the vocal performance between both acts.

Something that takes points off from the overall listening experience is the programmed drums. I tried hard not to pay attention to the horrible cymbal sound, but it was impossible. Some programmed drums sound decent and you kind of tolerate the lack of a human drummer, but in this case, Alex, as a producer of the record, failed to recreate an acceptable drum sound. That would be my only gripe about this record, but I have to say that the lack of more organic percussion is a major flaw that most listeners wouldn't let pass.

Altogether, Hell and Damnation is a decent debut from Alex’s side project. The evil feeling that Morbid Macabre transmit is honest and the sound it tries to emulate is aggressive and hateful. I augur a promising future for this band in the Colombian underground metal scene but I also think that they have to find a real drummer if they want to sound more organic in the drumming department. Long-life to death metal!