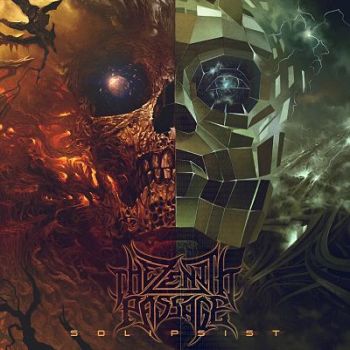 Remember when The Faceless made good music? It's been a while, I know. "Autotheism" wasn't bad, it was just a step in a different direction that maybe didn't pan out as one would hope. I only heard their most recent record once or twice and it seemed to nosedive more into whatever they were trying to do on "Autotheism," and the music began to sour quickly. A true shame when you consider how revolutionary they once were, and all the controversies surrounding lead guitarist and main songwriter Michael Keene haven't made matters much better.

But, this isn't about The Faceless, now is it? No, it's not. This is about a much newer band, The Zenith Passage and their debut record "Solipsist" released in 2016. However, the comparisons to The Faceless cannot go unheard, because, let's face it, they sound a lot like The Faceless. This straight up sounds like the follow up to "Planetary Duality" that we should have received, but ultimately didn't. From the riffs and leads to the rapid fire growled vocals and occasional robotic cleans, it sounds like the next evolution of The Faceless' amazing sophomore album.

I just don't think The Zenith Passage should be looked at as a one trick pony or as just some bland copy band. The music on here is genuinely good and refreshing, and it gives us insight to what a true successor to that glorious aforementioned album would sound like. It's modernized, and there are other apparent influences in their sound. One could argue some Fleshgod Apocalypse as the music tends to include some rare, but fitting classical opera sections intertwined into the tech death. I get a heavy sense of pure, prime Gorguts in some of the riffs, which I absolutely love. This is mostly apparent in the song Hypnagogia which sounds like a modernized "From Wisdom to Hate" extra. Perhaps, even a little Psycroptic in some of the more groovier, elongated riffs? A bit too modern to completely remind me of the glory days of Chalky era Psycroptic, but I get the sense that their influences still leaked into the band's sound. Whatever the case may be, it's surprisingly great for a debut and filled with a lot of spices and flavors that, on repeated listens, make you realize these guys weren't just copying Mr. Keene's signature style.

There are still some typical, eye rolling worthy technical death metal tropes, like weird robotic ambience that takes up way too much time, a boring instrumental jazz interlude, and they do stumble with a forgettable track like "Metaphysical Solipsism." Aside from these small gripes, these are well-crafted slabs of technical riff-o-ramas (who I stole that term from, I don't know, but thank you), complete with a tight production, impressive leads, catchy drumming and, once again, moderate vocals that do little to stand out, aside from some pretty cool bursts of speedy vocal delivery. There's some cleans on here that are better utilized than the pretty stupid ones on "Planetary Duality," but they're still not really well used aside from maybe one time. Huge props for giving it a try though.

The riffs are the meat of this album, though. A lot of really interesting ones, and some that are just downright fucking heavy. Whether it's slow or fast, the riffs are almost always the highlight of what's going on, they're very chunky and mean sounding. Like I always say, if you're making metal, the most important thing is good riffs! The Zenith Passage realizes that, no matter what kind of metal you make, the riffs should be your main priority and everything else is the toppings. Solid fucking riffs worth revisiting time and time again, and cranking all the way up when you're stuck in traffic.

So, yes, it's true - they sound like The Faceless. But, you should really move past that and realize that this is pretty fucking good technical death metal, and give them a try. They write good riffs, good enough leads, throw in some nice experiments usually do pan out, and they strung all of these together into listenable, memorable songs. Not many bands can do that, especially not this early on in their career. It's been 5 years since this album was released, so I'm really hoping there's a follow up soon. It'll be interesting to see where they go, as I imagine they'll probably start to incorporate other influences to modernize their sound for the ever changing landscape. An instant classic.

Damn, when did The Faceless get their shit together and finally follow up Autotheism? I thought it was never gonna happen, what with the revolving-door lineup and Michael Keene's control freak tendencies. It's been so long since I remembered what I liked so much about the band, because their most recent album had a tendency to get caught up in its own ass and made way too much effort to be some sort of atmospheric, cosmic masterpiece as opposed to just writing some great riffs first and then integrating the atmosphere later. This definitely doesn't have that problem; the "ethereal cosmos" sort of feel is reserved for the interludes and hyperwarping melodic lead sections on Solipsist...hold on a second. I'm getting a report that this isn't actually a Faceless album, and it's actually by a different band entirely? What the fuck is this sorcery?

If this was presented to me on a blank CD without any information as to who the band was, I would tell you that this was The Faceless' new full-length, no questions about it. The signature riffing style of The Zenith Passage is almost identical. The oddly timed start-stop chugging on a song like "Simulated Reality" sounds like something straight out of Planetary Duality in terms of both the guitars and the drums (think "Xenochrist"). Who else does that opening/main riff on "Deus Deceptor" remind you of? Psycroptic, maybe? It doesn't really have Joe Haley's unique little inflections, though, sounds a bit too Americanized, and I'm sure Psycroptic were also a big influence on The Faceless as well. They've even gone as far as to replicate the same sort of "futuristic alien theology" theme that The Faceless had going on both aesthetically and lyrically. Want any more proof that the two bands sound mind-bogglingly similar? How about the fact that Justin McKinney (the lead guitarist/bassist here) actually joined the fucking Faceless in 2015, and at this point is the only other member in the band along with Keene (according to their metal-archives page, anyway?) Christ, Keene thought he had the vibe down well enough that he poached him for his own band. The similarities are astonishing. I first came across this album when it automatically started playing on youtube after another album ended, and I legitimately thought I was listening to The Faceless for a solid 20 minutes until I actually checked the video.

Usually, being a clone of another band to such a high degree would be a point against the band, but Solipsist turns the teacher into a student. If this were actually a Faceless album, it would be their best album. Akeldama and Planetary Duality are both excellent and probably mandatory if you're into modern tech-deathcore, but Autotheism had a certain something missing from it. I couldn't put it into words before, but after listening to Solipsist I understand now what it lacked. Not only did Autotheism focus too much on cosmic atmosphere, but said atmospheric diversions weren't nearly as engaging as they should have been. It sounded like they were trying a little too hard to push their sound in new directions, and the forced atmosphere seeped into all of the riffs as well and made them lose the things that made Planetary Duality such a beast of an album. The Zenith Passage understand how to give off a "spacey" feel in a tech-death album: a vocoder section here, a little clean guitar there, a quick dollop of ominous keyboards...just the occasional bits and pieces. Something minimal to create some contrast for when the riffs kick back in, and when they DO kick in, they should be all that's going on. Seriously, why the hell did The Faceless think that saxophone section in "Deconsecrate" was necessary? Not only was it totally ill-fitting, it comes off as pretentious. The Zenith Passage understand that less is more; check out the end of "Simulated Reality" for one of the best examples, as it's both a sublime closing section and serves as a great interlude in between songs.

This takes Autotheism and cuts out all the bullshit from the atmosphere, but it also trims some of the fat from the riffing style of Planetary Duality as well. The Zenith Passage focus more on the blazing tech-death leads and are much less abrupt with their pacing. Now, that worked well for The Faceless in its own right, but I just happen to enjoy The Zenith Passage's approach to the style a little bit more. There's not as much reliance on chugging to release tension, and the deathcore influence is more-or-less absent. Again, that was part of what made Planetary Duality unique in its own way, but my taste leans more towards the tech-death than the deathcore side of things, so the emphasis on the finger-twisting riffs is appreciated. Instead, I hear much more of a Psycroptic influence as well as the occasional nod to Quebechnical bands like Beyond Creation, Unhuman and Augury as well.

So yeah, if you're a fan of The Faceless but have been twiddling your thumbs waiting for them to drop more than just a single, Solipsist will tide you over quite nicely. Perhaps if you liked some of the ideas Michael Keene and co. had before but weren't entirely sold on them before, this may be more up your alley. The riffs, drumming, vocals and atmosphere are all functionally identical, but the songwriting is more dense and focused and Solipsist spends much less time with its head up its own ass so it's definitely going to be more enjoyable in the long run. Tech-death had undergone a bit of a renaissance this year thanks to bands like First Fragment and Vale of Pnath, and The Zenith Passage have also played a large role in that rebirth of crazy, heavy wank.