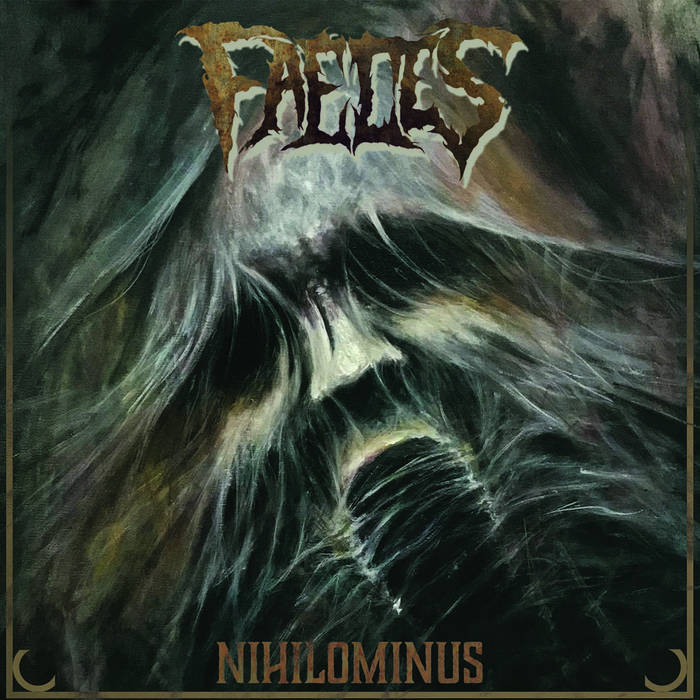 One thing that’s always interesting to find out when you explore the whole of extreme metal is discovering bands playing sub genres you didn’t expect from said band’s home country. And that’s exactly the case for Faeces, a Polish grindcore and brutal death metal act, who released their fourth full length Nihilominus in 2021 through Defense Records after a decade-long wait.

While my opening sentence might heavily veer into the anecdotal, given how the Polish extreme metal scene is mostly known for black metal and death metal, and everything in between, then yes, a brutal grind band is certainly something of a novelty. And with that out of the way, how does this particular record stack up? I’d say it's a decent if unadventurous album, but the band more than makes up for it with their skills, passion and very tight performances.

Faeces waste absolutely no time, from the first track you get what all good brutal death and grind bands should have, downtuned guitars, caveman riffs, gurgling growls with the occasional pig squeals, and pounding drumming. All well and good, but what truly caught my attention about Faeces is not how they checked all the boxes for the subgenre, but how their actual playing and focus leans much more into death metal, particularly Vader style death metal, than grindcore or brutal death metal, if anything. The band uses the key elements and signifiers of brutal death and grind as their groundwork, and play pure, uncut and undiluted death metal, and the production gives the whole album a modern twist whilst keeping an old school, straightforward approach. While the band also flex their technicality, they also play around with melody and even some progressive elements that are reminiscent of late era Death and Nile. The best track in the record and a good example of the band mixing all those elements is 'Company Of Cold Skulls', wherein the band does it all, speed, technicality, melody and brutality seamlessly and in a very uniform way, and they keep on that momentum for the rest of the album in a pleasing way.

It was surprising how varied and dynamic this record is, and how it feels like a sampler of the best elements of various styles of death metal. The production of Michał Pijocha does an excellent job in making it all sound great and without overpolishing the band’s raw performances. However, while the band does an excellent job of being dynamic and straightforward, the album can be a bit one-note. That in it of itself isn’t a bad thing, and it's definitely not a dig at the band’s talent, but the album as a whole really doesn’t take the experimentation too far, and while they do keep progressive elements and play around with more melodies, they still lean more favorably into the brutality and heavy riffs more than anything else, so by the second quarter the band has already played all their tricks and just keep the momentum in a steady way. That last aspect is worth praising, as the band know exactly how to keep the consistency and show genuine promise, but I still feel like this record is something of a transitional album, the type of album that’s a stepping stone into the band’s next phase of development, and while the thought of them building on what they did hear is exciting, that’s pretty much a potential future. Still, for what it is, Faeces still managed to make a solid, consistent and very dynamic record that will please many death metal fans overall.

Best tracks: 'Company Of Cold Skulls', 'My Demons Are Dead'