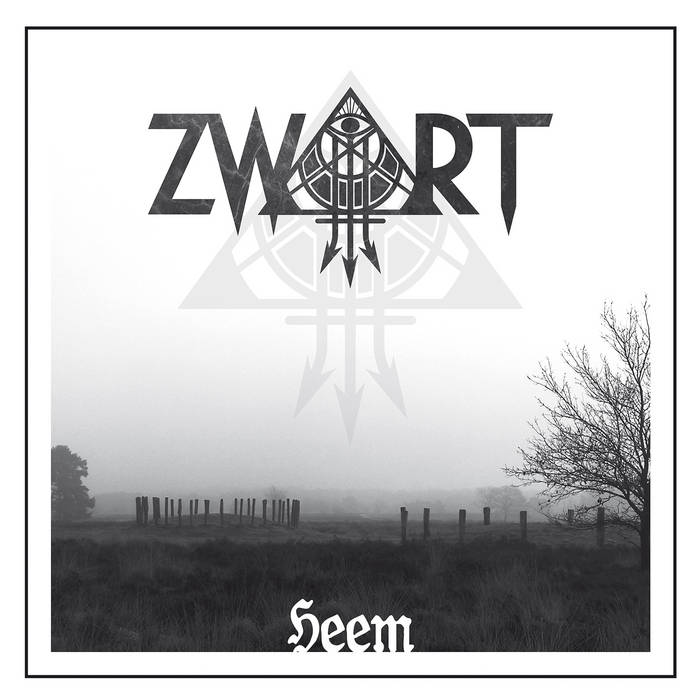 Dutch quartet Zwart (means „black“ in English) released their first full-length album Heem ("home") via Void Wanderer Records this May. The previous released single Ravenkloof was already very promising and showed the music as dark, gloomy, harsh and a bit raw black metal with some Scandinavian influences. Nevertheless the music has its own uniqueness because they guys have a lot of more doomy and melodic episodes hidden in the tracks.

The tremolo picking and blast beats in the songs spread some very cold and mysterious atmosphere and the Dutch language (which is sometimes more spoken than sung) gives it a very special morbid touch. While some of tracks appear to be a more blackened doom-death version of Winter or early Paradise Lost ('Woens Heil', 'Of Gods, Man And The Spirits Of The Dead') other tracks keep up the pace a little bit more so that the album doesn't only live from the melancholic atmosphere and darkness. 'Uit De Ziel' is a pure black metal track which lives from the melodies and the tremolo picking again. It is a very old-school mid-paced song which might have been written by bands like Ulver or Enslaved in the early 90s when they weren't into that avant-garde crap. I guess that other bands would have killed for creating such a song which is one of the highlights on Heem. The title track however reminds a little bit of “Sanitarium” by Metallica (the opening riff) and is a very nice atmospheric closer to Zwart's debut which turns into a furious black metal song at the end.
Lyrically the album deals with the heritage and remembrance of the ancestors. All songs are written in Dutch so it might be a little bit tricky to understand them but its just another reason to learn Dutch if you don't know that language.

Heem was recorded by the band and Gerben van der Aa in Tilburg and appears to be a very good production. A little bit lo-fi though but it creates this very special cold and raw atmosphere black metal lives from. By the way, the digital mastering was done by Magnus “Devo” Andersson some might still know from the early works by Marduk or Allegiance.

If you like some slower and atmospheric black metal mixed with a lot of doom parts, this album might be the right thing for you. The single is definitely worth checking out and it helps in making a judgment about it.