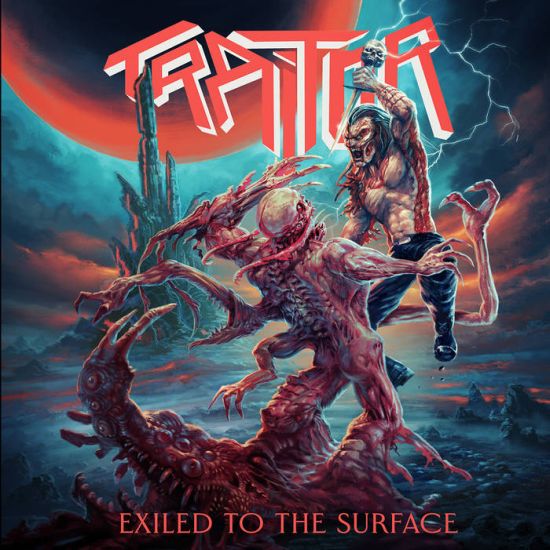 What do have Captain Kirk (R.I.P. Nichelle Nichols….), Agent Mulder and George Michael in common? No idea? Well, they all found their way on the newest album Exiled To The Surface by German thrashers Traitor.

The album starts with a frosty introduction called 'Rura Penthe' (you know, the Klingon detention camp planet where Kirk and Co were banned to after being sentenced having assassinated the Klingon chancellor) and after this 55 second opener the trash assault starts with 'Exiled To The Surface'. The quartet from Baden-Würtemberg mixes aggressive thrash riffs with a quite modern touch. Don't get me wrong, this IS old school thrash but the sound is pretty modern and very fat produced. It is a very well-balanced and with some great sounding drums and bass. Of course the guys don't invent anything totally new or groundbreaking with their fourth full-length album but if you are a thrash maniac you will lose something you if you don't know this one.

On the album you can find some very nice surprises. The first one is that the guys got a well-known guest vocalist on 'Total Thrash' (besides they also participated in the same titled movie about the German thrash metal scene which was released about a month ago), namely Tom Angelripper. The track is a very passionate homage to the thrash metal scene and has a lot of references in it. The other big surprise (and it took me some seconds to realize which song it is they covered and I really had to laugh hard then) is 'Careless Whisper' originally written by George Michael. The song is amazing. They kept the original melodies quite alive but the liner notes and aggressive pissed-off vocals are kept in a brutal thrash style. Another track worth mentioning on the album is '66 Exeter Street'. Here Agent Mulder comes into play (if anybody still remembers this fantastic series). In this mid-tempo neckbreaker with a total catchy riffing and drumming they worship “Eugene Victor Tooms” – the liver eating mass murderer who lived and hibernated at that place. 'Teutonic Storm (2021)' is a new recording of an old track from their 2015 album Venomizer – it is maybe the only track they could have spared out because the original was pretty cool and (maybe also because of the guest vocals from Burkard Schmitt from Hate Squad) much more aggressive. It would be easy to write about all these fantastic tracks here but it is better if you explore the album, I can promise you that you won't be disappointed.

It is really amazing how the band developed since their last album Knee-Deep In The Dead. It wasn't a bad one but in comparison to Exiled To The Surface it appears to be half-baked and not really that convincing. Let's hope that this one will help the guys to become much more famous (also international), they truly deserved it. So, I gotta go to the basement now to take out my X-Files DVDs again, they really hooked me with 'Exeter Street 66'. THE TRUTH IS OUT THERE!!!!!