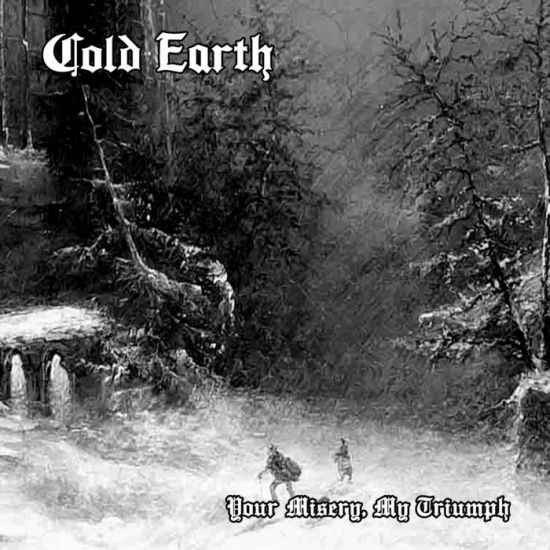 Type: Full-Length
Release Date: May 24th, 2020
Label: Absolute Contempt Records
Genre: Black
1 As I Pass Through The Entrance Of Void
2 A Harrowing Gaze Of Torment
3 Inscriptions At The Cemetery Gates
4 Thy Tears Of Blood Grace My Eternal Grief
5 And Then, I Awoke From Deceitful Dreams
6 Following The Voice Of Misanthropic Desire
7 Spill The Blood Of The Lamb (Judas Iscariot Cover)

This is what this album wants to be:

“This album is a tribute to Judas Iscariot and the protagonists of the radical late 90s / early 00s black metal movement”. End of quote, printed in the booklet.

This is what this album is not:

Your Misery, My Triumph spits on a transparent, clearly defined production. Moreover, it naturally shits on innovation. If it were a car, it would only have reverse gears. The release from 2020 is not multi-layered and it has never heard of technical nuances. It is not interested in any form of fragile or soft moments. The material cannot reach a broad audience, because Your Misery, My Triumph is a niche product. If there was one thing its creators did not strive for, it was consensus. But they also avoid any sort of experiment. Even surprising twists or turns do not show up. Nevertheless, the album cannot be blamed for making a boring offering.

This is what this album is:

No doubt, one needs good nerves to get through this massacre unscathed. Right from the beginning, Cold Earth take the fast lane and they stay on it during the entire 31 minutes. Indeed, it’s a total worship of Judas Iscariot – but much better than the sometimes nerve-shattering original with its overlong, at times boring compositions. Your Misery, My Triumph sounds maximum drastic, uncouth, intensive and narrow-minded. It’s a pure crusade against everything that does not fit into the thought patterns of the protagonists. Yes, I have realized that the fifth track, 'And Then, I Awoke From Deceitful Dreams', starts with a nearly atmospheric part. But we should not over-emphasize this moment of weakness. Most listeners might have died in the hailstorm of the first four songs anyway and, needless to say, 'And Then, I Awoke…' is also dominated by pure devastation. Murderous guitar lines cross the blades with the constant barrage of the drums while the raw vocals are almost cannibalised by the instrumental whirlwind. I don’t care, I just enjoy.

This is what I think about the album:

In a nutshell, Your Misery, My Triumph is awesome. Its fanaticism and its dogmatism, its unwillingness to compromise and its unleashed violence distinguish it. I do not agree that today’s scene consists only of “weakness, clownery and entertainment”, but I admit that only a few bands come closer than Cold Earth to the burning pits in the centre of black metal. I cannot name a highlight, because all songs (even the Judas Iscariot cover) make my blood boil and my pulse run faster. The Teutonic horde invites us to raise a chalice of poser’s blood, but unfortunately I do not have this liquid at hand right now. Anyway, I’ll count myself as part of the “elite” until proven otherwise. If you want to do the same, Your Misery, My Triumph provides the almost perfect soundtrack for this and impressive in its radicality.