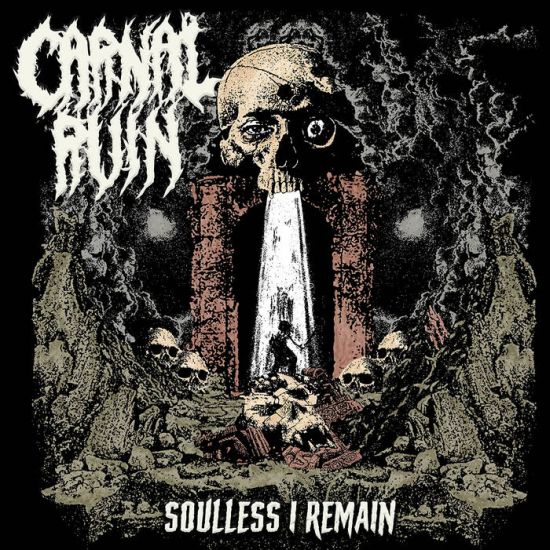 Coming out of the ever scorching Tampa Bay Florida is a four piece called Carnal Ruin with their debut titled Soulless I Remain. My take, it slays, has a crushing presence and dominates throughout its playtime. Death metal is in good hands I could say with gems such as this. Set to be released through Redefining Darkness Records on September 2nd 2022, Soulless I Remain harvests some of death metal's finest bits and presents them in a somewhat fresh way.

From the opener 'The Evening Redness In The West', the stage is set for what follows and turning out to be a mystical yet altogether raging death metal song, 'Epoch Of Dread'. Utilizing melodic passages and soaring guitar licks fused with the tremor of boulder-heavy vocals, this song takes the listener on a groovy ride through the genre all the while retaining the sparkle of the mid to late nineties Swedish death metal sound. Greater emphasis of this is placed on 'Immortalis' with thrashing mid tempo sections being used carefully, as sprawling, ominous and melancholic melodicism is introduced to support the ongoing flow of the music.

The sound overall is Swedish (to me), though Carnal Ruin may or may not have used HM-2 pedals, their style takes quite a few pages out that sector of death metal and even black metal (vocally), yet simultaneously incorporating a mystical overtone. 'Barren Lands' for example uses a cool groovy temperament to amplify the crushing sound then traverses into an acoustic closing that casts a tranquil blanket over the material. The way Carnal Ruin handles these diverse components all the while being able to keep the essential elements of death metal well molded cannot go unrecognized even if you tried to, you'd be compelled to acknowledge this merge of dynamics.

Soulless I Remain is a card well played by the Floridians, following a few EPs and a demo, it seems as if Carnal Ruin have nailed the sound they have been aiming for, however in doing so, they have also managed to create one of the better albums within the death metal genre. A true prize and ear-catcher of 2022; Soulless I Remain anoints itself in the trench of glorious death metal fluids.