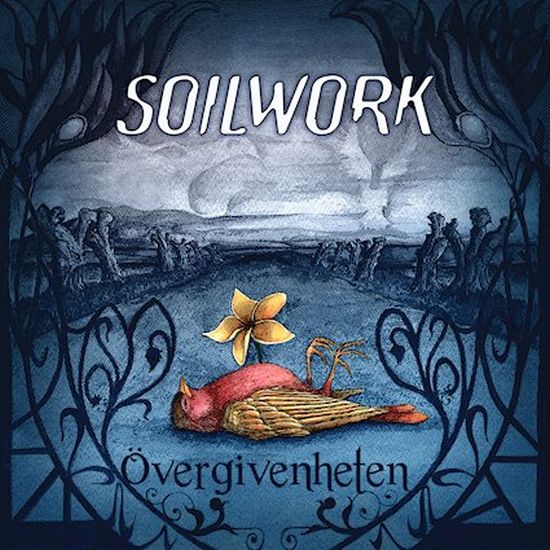 Soilwork is a band that can be defined as “second generation” in the scene of Swedish melodic death metal, starting half a decade after hall of fame names such as Dark Tranquility, At The Gates and In Flames, and in their first records you could hear how much of an influence these older bands had on the younger one. A natural thing, of course, one that anybody should expect and surely helped them to rise through the ranks and get well deserved recognition. A tale as old as time and we will see happening again time and time again.

Time passed on and Soilwork became a household of the genre by its own name and merits, releasing a string of acclaimed albums through the 2000’s all the way to the Mid-2010’s. And that is the point where Björn “Speed” and his associates saw themselves in that moment of pretty much every band eventually gets: keep doing this reassured kind of thing that been working for a long time or bet in something a bit different, bold and fresh?

They eventually took the second path.

The Ride Majestic came out in 2015 and turned as the most divisive entry on the band’s discography so far. Some people loved, some hated, some thought it didn’t changed enough, others thought it was too different. The usual discourse you see in this situations, in any kind of music out there. I myself think of it as a good album, even if somewhat unsure of what to really do and how to go forward from what the band been doing from almost twenty years, but nevertheless a decent entry.

After that we got Verkligheten in 2018, which was the natural progression of what we heard in the previous one, more mature, more solid and confident in this approach, yet still leaving room for some improvement.

And all of this leads us to 2022 and the releasing of Övergivenheten (a title in Swedish like last time, which means ‘Abandonment’, a trend I enjoy a lot), Soilwork’s twelfth full-length album, where we a see the band finally getting to the top of the game they had been working towards for quite some time now.

It is a big album, expansive, layered with many elements to be discovered in several listening sessions. The guitar work of Sylvain Coudret and David Andersson is precise, neat and rowdy in equal measures, providing a wild ride of technical mastery and a true death metal messy essence, going from the softest to the heaviest with ease, grace, balancing the raw punches with generous and delicious doses of swag.

Rasmus Ehrnborn’s bass doesn’t shine as much as it could, feeling a little relegated to the basics of rhythmic duties, but anyway made felt in there with competence, lying on the unshakable foundations of all the badassery going on over it. You don’t go to such heights and widths without some serious solidity under it.

Almost the same could be said for Bastian Thusgaard and his drum kit. The work is absolutely competent, make no mistake, but I believe an extra layer of punching could easily had been added in the tracks by him with some more space to grow and take the forefront for more time and more intensity. But again: nothing less than excellence on his front as well. The rhythmic foundation of this record isn't the MVP in here but does a hell of a good work anyway.

But then we come to the MVP’s: Björn’s better-than-ever vocals that surfs effortlessly over the waves caused by the magnetic performance of Sven Karlsson’s keyboards. Mega enjoyable, this duo elevate the album to the height the band always wanted since starting the more adventurous songwriting, going anywhere in any style and intonation, a journey of diversity that should be a delight to any fan of the band, the ones who follow them since the deathier early days, the ones who enjoy more the identity building years of the 200’s and mostly the people who dig deep into the recent forays.

All the elements work with a beautiful synchronicity. It sounds fresh, easy going, loosen up and ultimately fun, filled with the trademarks of Soilwork elements but enriched with visions, ideas, twists and turns that cement the name of the band as one of a kind. I suppose that all this enjoyable frisky attitude comes from the hard rock glam-infused side project The Night Flight Orchestra that had been quite active in the past few years with new releases and touring around, plus some tidbits form the AOR project Gathering Of Kings that Björn is also part, and that comes all for the best and I hope it keep going on.

But all praising a part, some criticizing is due: the track list will be better without the interludes and at least one regular track (maybe two, to be honest, but right now I feel generous). The way it is the thing becomes bloated, too long for its own good and overall enjoyment, and coming dangerously close to be tiresome. Editing is an import part of the process and sometimes the band must be inclement and left some cuts laying behind on the floor of the studio. Were I there, the victims would be the interludes, as I said, plus ‘Is It In Your Darkness’ and depending of mood maybe ‘Vultures’. Those are really just fillers.

On the other end of the spectrum my highlights are title track, that starts the works with a bang and set the vibe for whats comes next, the single ‘Nous Sommes La Guerre’ and ‘Electric Again’, which together with the opening made a tremendous impact and hook you right in for the ride. Then the pace keeps high and mighty with ‘Valleys Of Gloam’ a track that display all the good stuff and still has room for some surprises. A little later on ‘Death, I Hear You Calling’ and ‘This Godless Universe’ compose a banger duo that opens way to the final stretch that begins with the ‘Dreams Of Nowhere’ a gem of a track where Björn showcases the best of him as a singer and a front-man. This one is a candidate to classic.

And the journey ends with yet another bang. ‘On The Wings Of A Goddess Through Flaming Sheets Of Rain’ is just as epic as the title suggests that leaves at the finish line out of breath and craving for more even if you know that you are full and satisfied.

Big, loud, although maybe overstuffed, Övergivenheten is a triumph of vision and intent, the place where Soilwork wanted to be and how they wanted to sound in this last decade, a most satisfying conclusion for that quest.

Now, is that? There is room for more improvement? Or maybe another road ahead aiming for a new peak to reach? Only they know. But I will stick around to see what is.