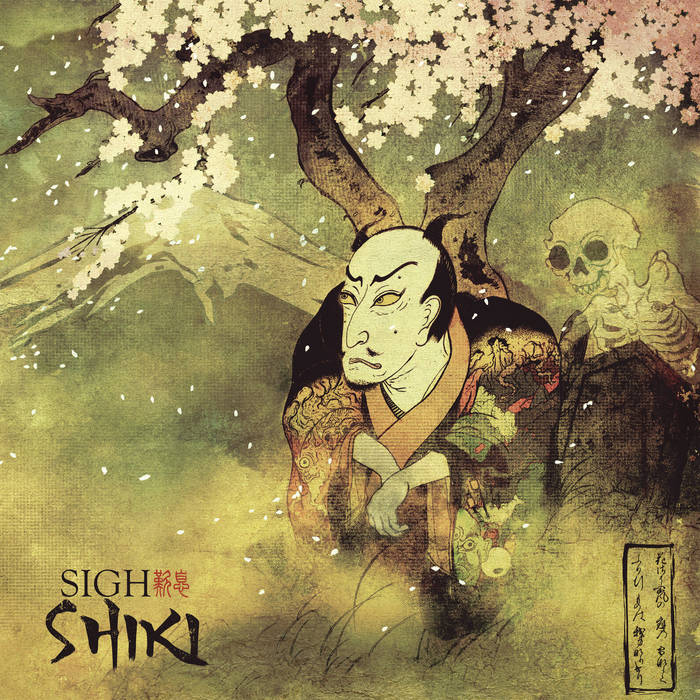 After being active for 32 years already, Japanese avant-garde-black metal legends Sigh will release Shiki their 12th full-length album on August 26th. When you know the previous albums, you know that Sigh always have some surprises up their sleeves. Is the title Shiki, which has a lot of meanings in the Japanese language (four seasons, time to die, conducting an orchestra, ceremony, motivation, color), already a hint that the band will worship some Vivaldi tunes? Or perform some depressive black metal? Why do I write these lines? Well, in the press info I got it was said that the band focused mainly onto the two meanings of “four seasons” and “time to die”. We will see…

First of all, the band got some prominent support on the guitars and drums, namely Frédéric Leclercq (Kreator) and Mike Heller (Fear Factory). But this is just a fun fact. If you didn't know it, you wouldn't recognize that because Sigh sounds weird and unpredictable - as always.

Starting with a very strange intro that brings some evil Japanese demons to the imagination, the band invokes a lot of Celtic Frost vibes in 'Kuroi Kage'. Slow and creeping guitars frame the song but of course Sigh wouldn't be Sigh if they didn't compose some psychedelic stuff around that. This track is a very haunting nightmarish one that sucks you into a feverish nightmare. Mirais high-pitched vocals underline this insane atmosphere and the Japanese language gives it a very special touch. But the album won't stay that slow and gloomy – they still can do some fast neck breaking black metal like in 'Shoujahitsumetsu'. This might be one of the fastest songs the band has ever written. A lot of classic heavy metal influences, especially in the guitar solos also find some space here, and it is absolutely amazing what the band has created with this one. Apart from the black and avant-garde tunes, you can find a lot of classic heavy metal vibes and sometimes the drums go pretty much into thrash metal. Check 'Satsui - Geshi No Ato' (hidden in the background) or 'Shikabane'. Anyway, the drums are thunderous and very powerfully performed, and really kick ass on this album. With 'Mayonaka No Kaii', I'm guessing these Japanese weirdos want to pay some tribute to Jethro Tull (if you listen to the flute here), but apart from this, that track is one of the highlights on Shiki, which with the amazing breaks, turns and surprisingly and suddenly starting instruments that you wouldn't expect - there is a roller coaster ride throughout entire run. But as I said, Sigh are always good for some surprises. Well, there may be bands in the heavy metal genre that – when you own one album by them, you won't get much new stuff with their next album – but Sigh is definitely NOT such a band. With Shiki they did another incomparable output with a lot of weird and outstanding compositions that will be kept in mind for sure.

Coming back to my statement from the beginning – no, they didn't do any Vivaldi worship, nor did they play any depressive suicidal black metal, but due to the press info “the concept and also the artwork is based around a traditional Japanese poem. […] Mirai explores how at this stage of life he himself is going through Autumn, with Winter coming soon, and so empathizes with the contrasting sentimental feelings from watching cherry blossoms (a symbol of spring) in full bloom.”

Wow, that sounds pretty interesting – I hope that the band has some English translations in the lyric sheet.

Rating: 9 out of 10 bloody cherry blossoms