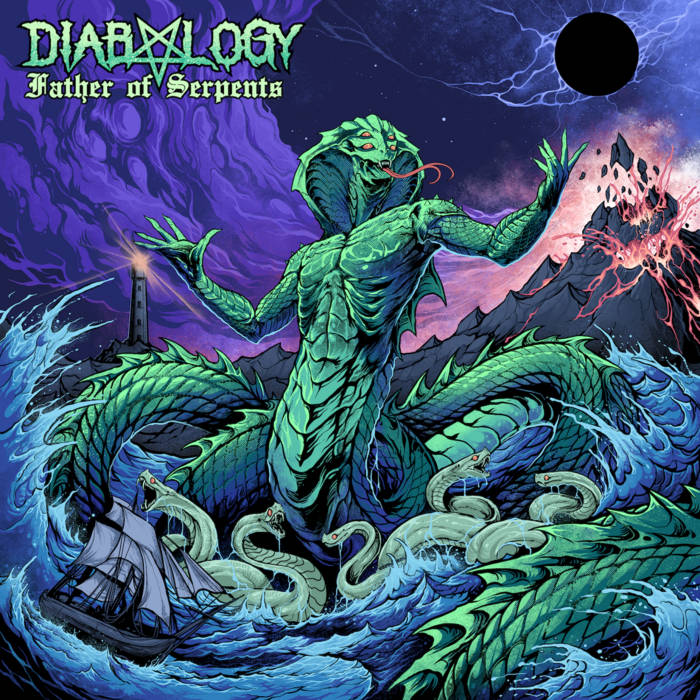 If you have read my writing to any extent, you'll realize I'm not a big thrash guy. In case you needed an example, there was a sold-out Testament/Exodus/Death Angel show in my city over the weekend, and I instead opted to drive two hours away for a Rivers Of Nihil show happening on the same night. (Side note: I wasn't into Rivers before but holy fuck you need to see them live, I think I "get" The Work now. Mushrooms are optional, but definitely recommended.)

As such, if I'm going to give the time of day to a thrash album, it's gonna have to do something a little different to draw my attention. Voivod-esque weirdness is usually a safe bet to keep me listening. Sometimes a little extra tech and speed will satisfy the part of my brain that subsists solely on Suffocation riffs. In very rare cases, the band is so focused and dedicated that every essence of their music oozes pure thrash in a way that is impossible to ignore.

DIABOLOGY does…none of those things. But you know what? Somehow, I can still fuck with this.

There's a couple of reasons why. Despite dabbling in the oft-maligned strains of groove-thrash that is the speciality of Machine Head and Trivium, this has more to it than most albums I've heard with that type of sound. My big beef with thrash is that most of the time, it's too restrictive - if you add enough melodic riffs and wailing cleans, it turns into power/speed metal. If you add too many heavy riffs and growls, it's death metal now. If you add a clean chorus that isn't infused with gang shouts, you've got metalcore, baby! Thrash gets caught in the middle, and you have fewer blocks to work with than any other metal genre. Yes, even funeral doom.

DIABOLOGY blows past this limitation by splicing in some other influences where they see fit. 80s thrash bands only had other early thrash, punk rock and NWOBHM to help shape their sound, but since DIABOLOGY is a newer band, they have the advantage of being able to take pieces from other modern metal genres to help widen their range of motion. 'Chimera' and 'March To Sea' have chunky, mid-era Mastodon riffs that add a heavier element, and it adds an extra dynamic to the more classic "I wore a Metallica shirt every day when I was 14" type riffs that you hear in songs like 'Spoil'.

The group is tagged as "black/thrash" on Metal Archives but I don't hear a ton of black metal in here - maybe it comes from the harsh vocal tone? Lead vocalist Jesse Bergen has a breathy inflection on his mid-range rasp, with a bit of a shouty tone giving it some attitude and edge - similar to a more subdued version of Midnight. It's not my favorite tone (and the clean singing is a little rough around the edges), but nothing ever grates against your ears because the production job on this is excellent. Mixed by Dave Kaminsky (whose band Stone Healer put out my favorite album of 2021), you hear a clean, crisp sound that highlights the best of each instrument, while still having the appropriate level of crunch that is a requirement for heavy metal. There are the occasional ideas that feel a bit off, but to sound job masks the errors as much as it possibly can.

There's a lot of little bells and whistles in this that I've touched on, but often that can result in a haphazard, uninteresting mess of an album. It's a common pitfall of younger bands - in their eagerness to get their music out to the public, they cobble together any good idea they've had, regardless of how poorly they might flow together. DIABOLOGY still have that spunk and enthusiasm you always want to hear out of a younger band (if you're already bored with your own riffs by the time you're 25 that's never a good sign), like you get the sense they legitimately think their riffs are some of the best in the world - but since they already got all the knee-jerk impulses out on their first full-length, the writing on Father Of Serpents is much more deliberately paced, with some transitions being a bit less balls-to-the-wall in order to serve the song better in the long run.

Father Of Serpents comes out this Friday, October 7th, on Dissonant Hymns Records. If your interest is piqued, you can hear a full stream of the album below, with accompanying links to purchase the album and follow the band on all their socials as well.