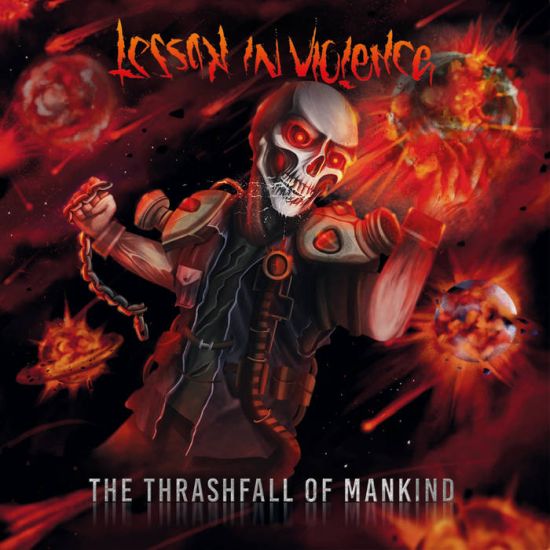 Every scene has its leaders and followers. Probably you already know what’s coming next… I’m sorry, Lesson In Violence belong to the latter. They play generic old school thrash metal and that’s always a good idea. Unfortunately, good ideas do not always lead to good results. So what is the shortcoming of The Thrashfall Of Mankind (actually a casual title)? From my point of view, the vocals are a big disadvantage. Lead singer Florian lacks charisma and expressiveness. He performs like a drunken punk, monotonous and pretty annoying. Nevertheless, he was surely the best choice within the given line-up, because the background vocals are even worse. They sound absolutely amateurish and uninspired.

When you try to blend out the singing, an album with a solid degree of energy remains. Generally speaking, the instrumental section avoids serious mistakes. The riffing delivers absolutely nothing new, but that’s okay. Old school, new sounds? This would not work. Sometimes the guitars create a pretty thrilling atmosphere (the instrumental beginning of 'Liar' is really good due to its flickering tones), sometimes the riffs are very or even too close to those of Exodus, the rodel models, the über-fathers. 'Dissembling Wings' is one of these songs where I miss at least a small quantum of personality. But okay, I speak about a first full-length and debutants have the right to show their inspiration. What I rather criticize is the tendency of some songs or at least choruses to be hardcore-compatible ('Social Madness'). Instead of delivering a catchy, not commercial, chorus, the band confronts us with slogans shouted in many voices. I really regret it, but they are as useless as the stereotyped artwork.

Finally, I want to put the focus on some enjoyable aspects. This debut is produced by someone who knows how thrash metal must sound. The guitars set the tone and some of the longer instrumental parts are truly well done, for example in 'Scum Of Society'. Doubtlessly, the guitar work does not lack edges and corners. I guess there is a robust potential, but the Teutonic newcomers were yet not able to transform it into a really convincing album. Or they just decided to put their “Force Of Habit” at the beginning of their discography - not in terms of style, but with respect to the quality. If that’s the case, they can be proud of this work: it’s better than the nadir of Exodus.