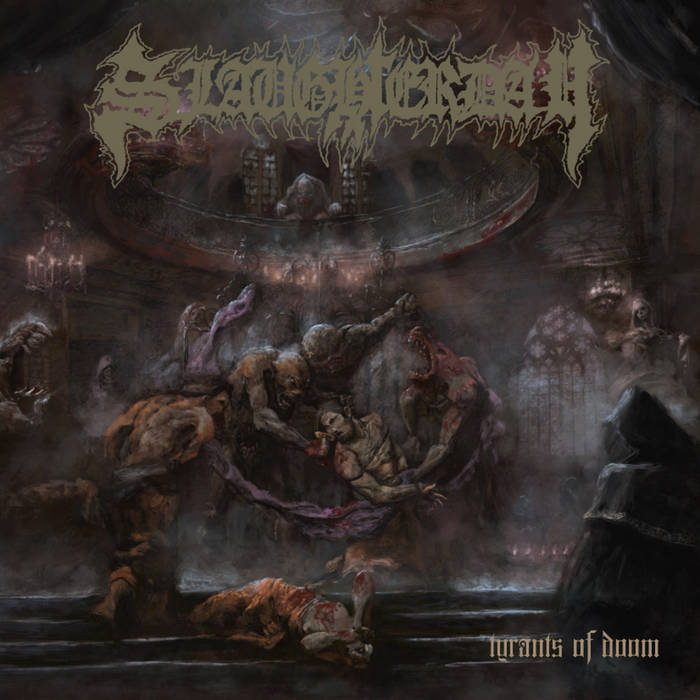 I have to state that Bernd Reiners and Jens Finger are two really busy guys. It is just about 1 ½ years ago that the duo from the German North Sea coast released their latest album Ancient Death Triumph and now they are already back with their fourth full-length Tyrants Of Doom. As usual they release it on the German old school death metal label F.D.A. Records and of course the whole foul stinking album was produced by Jörg Uken who did once again a very good job with it.

But the foul stinking album doesn't really hit the bull's eye – the last album was much fouler and stinkier than Tyrants Of Doom. This time they have much more classic heavy metal influences that are to be found in the songs and the melodic aspects are much more in the foreground than on their previous releases. Naturally they don't deny their death metal roots, especially old Autopsy vibes, but I would guess that some Death and some other classic death metal records found their way to their record player. Apart from that, this time there are so many classical metal influences from Rainbow, Judas Priest up to Tank to find that the album is pretty difficult to describe in a short version.

Alright, so let's focus a little bit more on the music. The first single that was released was 'Mauled' so the one or the other might have listened to it already. What starts as a dark, rumbling death metal song with a fantastic double bass inferno turns out into a very big surprise because of all the breaks and catchy parts that appear in the 5:36 minutes. The basic riff in the chorus reminds me of Celtic Frost (and with this of course comes along some black thrash stuff from Scandinavia). The balance between slow, doomy parts and the faster catchy ones is perfect and the song is a good example for the great songwriting abilities of the two Germans. The next track ('Coffined Saviour') is much more melodic and starts with a quite sick guitar solo in melodic minor. The driving riffs give much energy and the minor parts are very interesting counterparts to that and the guitar solos give tribute to some classic metal and even some bluesy stuff. 'Necromantic Visions' stands out with its dramatic guitar leads which underline Jens' instrumental skills and show that he might be one of the best guitar players at least in the German death metal scene. This is fantastic musicianship! Nevertheless Slaughterday can also do some slow stuff like in 'Pestilent Tombs'. It starts with a very creepy, threatening atmosphere but also soon turns into a death metal wrecking ball with some slow Autopsy-like instrumentalisation (and vocals) and on the other side some very melodic and catchy stuff with a hell of some bone-crushing riffs. 'Drown In Filth' has some really strong (old) Death-vibes, especially in the drumming pace and guitars in the middle of the track. 'Predator' closes the album of the often controversy-discussed Carnivore. I think it is cool to listen to a cover version of this band, this doesn't happen too often. This version is very true to detail, only the vocals are a little bit more death metal and it appears to be a little bit more powerful than the original.

Well, of course I could write about all the other songs in detail but I don't want to write a two-page-review here (although Tyrants Of Doom truly deserved this). I have listened to the album now for at least 20 times and still discover some new stuff in the song arrangements and I guess that this will be the same for you. So go ahead and make your own judgment about this album. For me the album is absolutely flawless and one of the hottest candidates for the best death metal album in 2022 and I don't recall when the last death metal album drew me from the woodwork that much. Apart from this, I guess there is no need to discuss who the spearhead of the German death metal scene is these days. Well done!

Rating: 10 out of 10 death metal ribbons