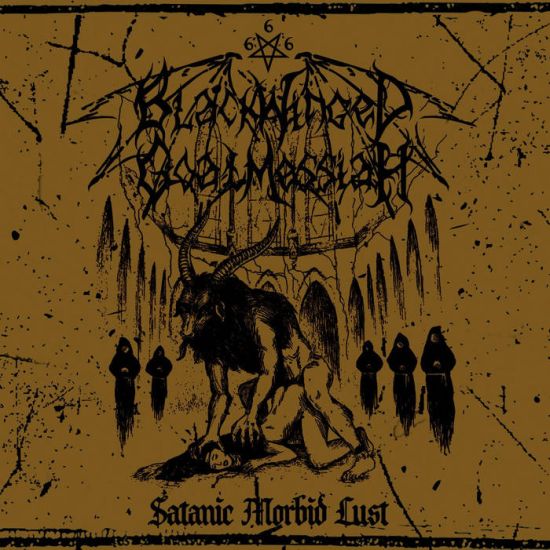 Black Winged Goat Messiah... well if that name doesn't tell you something, then the music will. With their first full-length launched on January 9th, 2022, this is the debut of Black Winged, one of the projects of main-man Conspirator who also is in charge of around 3 other solo projects (and all of them are pretty much black metal). Under the not-so-subtle title Satanic Morbid Lust this first release is a raw, brutal black metal show with a tinge of death and great atmosphere.

With an atmospheric, ritualistic intro, the album suddenly bursts into its first real track: 'Goatmageddon Finally Comes'. From this point onwards the music barely takes a break, yet it's not overly reliant on excessive blast-beats and extreme speed. It has a more raw approach with a less frantic pace and very simple riffs, but quite effective and catchy without losing brutality. I commend the fact that the bass is actually audible, its weight really perceptible. The drums are well executed and, as previously stated, doesn't rely too much on excessive speed or blast-beats. Rather, it is more straightforward and hard-hitting in its attack. As Conspirator is the man in charge of every instrument, I commend his labor on this album. His execution is clean and a total punch in the face. I don't know if he's the same man behind the vocals, but these are very well executed. High and low vocals converge regularly into a single demonic voice, which serves this album in a favorable way.

Production-wise, every instrument is crystal-clear and still retains a raw sound characteristic of black metal as a whole. Due to this approach in sound, you can hear the excellent execution of riffs and solos on the album (which are a really nice touch). As stated before, the riffs are very simple but quite heavy and catchy. The the record also introduces a couple of covers from 2 well-respected names in black metal: VON and Beherit, and they are a great addition. VON's cover ('Watain') is the definition of "straightforward" but the sound in this album adds even more crushing weight. And Beherit's cover ('Black Arts') is well done, although the idea of placing the cover after the outro of the album seems a little weird to me.

Overall it is a great debut for Black Winged and despite its simplicity and repetitiveness, I would recommend you to give it a spin. The guy has a great foundation on this project and he may perfect his ideas on subsequent releases. It isn't a game-changer but if you like your black metal raw, with a touch of death and atmospheric, then this is for you.