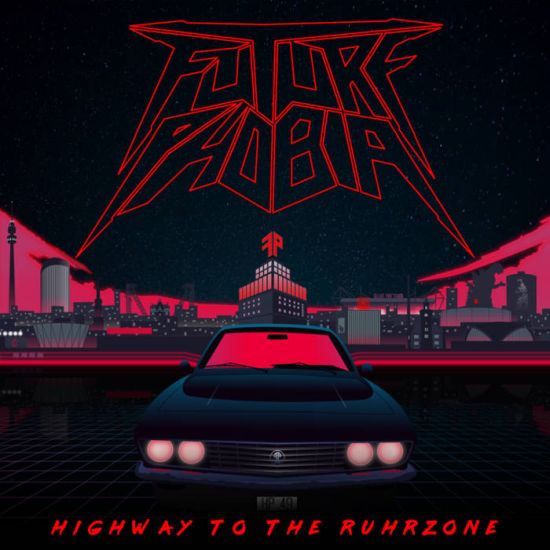 Are you ready for a trip to the lovely Ruhr Area? Yes? All right so fasten your seatbelts and take the Highway To The Ruhrzone. Having a look at the cover the connoisseur of the Eastern Ruhr Area will soon discover many things of the silhouette of Dortmund and inside the booklet some may also recognize some very popular places for the metalheads in that city.

Now for the musical question - are we going to take the highway as usual in the Ruhr Area with a lot of traffic jams and quite slowly or do we have the chance to ride with full speed? Well, we got lucky, there aren't too many cars with us on the streets. Futurephobia plays quite forward thrash metal with a lot of crossover influences, quite similar to bands like Municipal Waste, Gama Bomb or Suicidal Tendencies. Vocalist Daniel Gottschalk sounds like a samurai maniac with some very high-pitched, pissed-off vocals that matches very well to the galloping tracks. The four songs are kept in a very catchy style that makes it easy to bang along and here and there are also some casual guitar solos to be heard. The tempo is kept up quite high but never slips into some chaotic riffing or incomprehensible structures. The crossover elements mostly appear with some gang-shouts and some punk-style riffing.

'Unacceptable Conditions' sometimes even reminds of some Norwegian black-thrash bands with the simple three-riff staccatos. The guitar solo in that song creates some old-school feeling that keeps the spirit of the 80s alive. This is probably the best song. 'Ruhrpott, Du Hurensohn' ("Ruhr Area You Son Of A Bitch”) gets a nomination for the best song title in German and is another catchy track with a lot of groovy parts. This might be the party track of the band and should come over pretty well playing live. The production could be a little bit more powerful, sometimes it sounds a little bit thin and weak. I wonder a little bit about that because the album was mixed and mastered by Andy Classen (ex-Holy Moses. Not too bad but there are some small nuances that you can notice).

Highway To The Ruhrzone is a very promising EP from a quite young and unknown band and hopefully the guys will start recording some new stuff to present us with a full-length album soon.