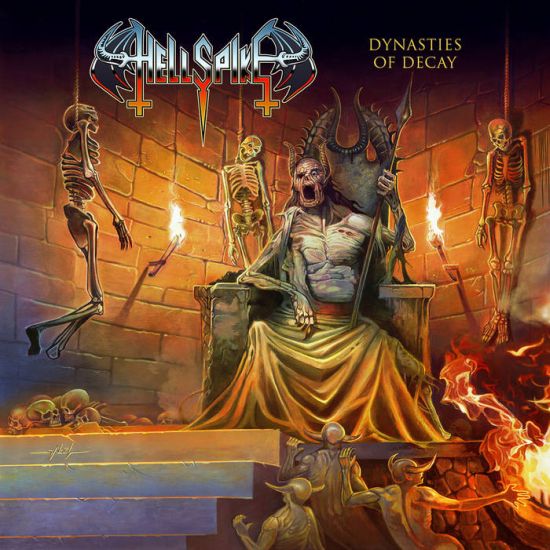 Do you appreciate bands that make nothing but simply good music? Hellspike are not interested in exploring the extremes, they do not think that restless “evolution” is a value in itself and they stay away from any kind of commercial approach. Their second full-length takes a clear position: the same style as on the debut (a melange of heavy, speed, power and thrash metal), the same label (the reliable Metal On Metal) and the same quality level. Dynasties Of Decay combines tradition and modernity in a charming way. It does not sound like the outputs of old-fashioned, slightly speed-influenced formations like Satan and it cannot be confused with pure thrash or speed metal albums. One reason for this is the powerful, natural voice of the lead vocalist. His pretty charismatic vocals sound neither too soft nor overly aggressive.

Of course, it needs no explanation that even a very suitable voice needs a stable instrumentation, but don’t worry, that’s the case here. Hellspike deliver cool guitar sounds in abundance. They walk the fine line between casualty and aggression with masterful elegance and they always have this rebellious element that separates real metal from wannabes like Sabaton. The musical content of Dynasties Of Decay would have suited Judas Priest well as a middle ground between "British Steel" and "Defenders Of The Faith". Too bad that Halford and his comrades decided to use the “Turbo”. Anyway, if you like Priest’s real metal albums or the works from some German epigones (Lions Breed, Atlain, early Steeler), you probably have a similar taste to the boys from Hellspike.

I also like the fact that the Portugueses do not shy away from pretty complex songs. Even 'Divide To Rule', opulently designed with a playtime of more than seven minutes, does not fall victim to repetitive or boring parts. Quite the opposite, the song scores with an enormous vitality. But don’t get me wrong, the pretty straight pieces like 'Gone To Waste' also present only lively parts and are not interested in offering half-baked riffs.

But I do not need to speak about single song, because all remaining tracks possess this feature (vitality) as well, although I miss the vocals during the instrumental 'On Through The Times'. Anyway, there is no lukewarm semi-ballad or other useless stuff. The guitar player obviously likes screaming sounds more than calm tones and his solo excursions are always very well embedded into the songs. This dude knows what he does, if I am not mistaken his skills result in almost perfectly flowing songs like 'They Live' or the title track. So metal masochists should not buy this album but torture themselves with something else (Sabaton shit, Manowar nonsense or comparable attacks against good taste). The remaining part of the scene cannot do much wrong with Dynasties Of Death, although an absolute mega-hit is missing. But it is always good if a band leaves a little space for improvement. In the end, the next record should always be better than the current one.