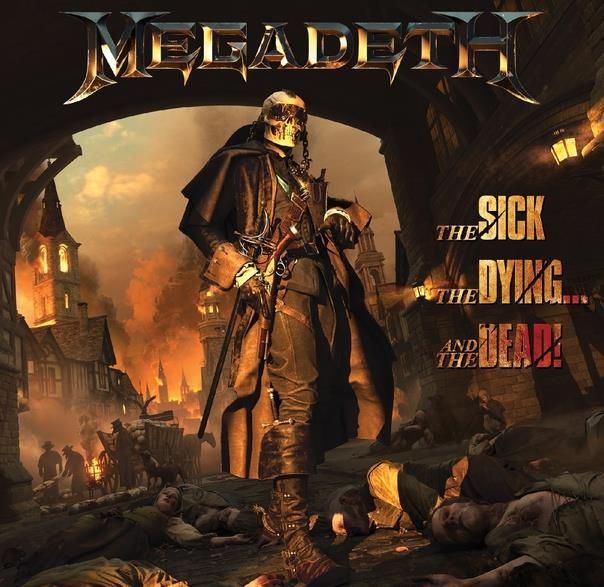 When I was younger I wasn't really a fan of Megadeth; I thought their style was too close to traditional heavy metal, so slower than Slayer and I had a need for speed. A couple of years ago I revisited their first albums, Peace Sells... was ok but I didn’t love so much blues on the basslines and groove in general. So Far, So Good, So What seemed a little bit better but was somehow shadowed by Rust In Peace, that strikes you from the first time you listen to it. Technical and ambitious songwriting, excellent string instrumentation overall. Countdown To Extinction is more laid back, I wouldn't say it's melodic because it isn't as cheesy and pompous as let's say... power metal; but the use of harmonic tension is intelligent, it helps to develop a dark and chilling atmosphere. On The Sick, The Dying And The Dead I found a collection of the very best moments of those classic albums, surprisingly.

I noted the personnel change at first, long time bassist Dave Ellefson was replaced by Steve DiGiorgio. In terms of composition it implies a purge of the classic groovy basslines from the former but at the same time it doesn't sound like a record done by SDG, I assume he was told strictly what to play so the bass lines are pretty simple and just serve as a mattress for the guitars, totally relegated on a second plane. You can hear the bass but even on the mix it isn't as loud as on "Individual Thought Patterns" by Death or "Defiant Imagination" by Quo Vadis. I read on an interview with drummer Dirk Verbeuren that his drum parts were initially developed by Dave Mustaine in terms of which was the pace and the rhythmic tension most appropriate for each part of the songs, and latter he perfected the fills and breaks with his drumming skills. That being said, this is one of the richest albums of Megadeth in terms of percussion; it is modern, precise and aggressive. Dirk also wrote the main riffs from 'Life In Hell' and another riff from 'Nightstalkers'.

The guitar work is outstanding as you can imagine, prime Mustaine with lots of twists but never losing the edge. The fast numbers like 'The Sick, The Dying And The Dead', 'Life In Hell', 'Nightstalkers', 'Célebutante' and 'We'll Be Back' are complete bangers with vicious riffing and virtuosic soloing, double bass hammering on the drums and everything. The rest of the album is mid paced, heavier and leaves room for a little bit of experimentation like the eerie guitar intro of 'Mission To Mars' which is kind of progressive and space-like. 'Dogs Of Chernobyl' features an acoustic intro with metallic strings that sounds super cool, proving Dave is still a hell of a guitarist. There’s another interesting breakdown in 'Nightstalkers' at the end of the piece, with orchestral arrangements that sound straight outta Compton… I guess that was ICE-T’s collaboration. Summing up, this is Megadeth’s best album in 30 years and it’s completely on par with their beloved classics and other thrash metal staples; if you love classic thrash and traditional heavy metal you’ll definitely like this.