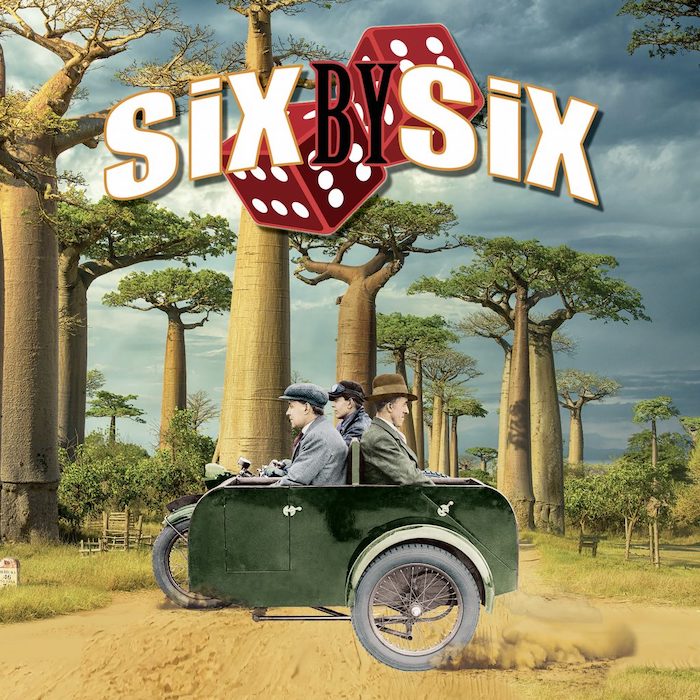 Sagas guitarist Ian Crichton, Saxons drummer Nigel Glockler and vocalist Robert Berry (ex-"3") have formed a new group called Six By Six. This sounds pretty confusing because each of them has their own style of music in their original bands so the question about their actual style of music is pretty much justified. But as justified as it is, it is also quite tricky to answer that. But let's start from the beginning. First of all I have to state that these three musicians did an amazing job on their instruments. Of course we all do know Nigel Glocklers superb drumming in Saxon which he proved last year on “Carpe Diem” but also Ian Crichton did a fantastic job on guitar and Robert Berrys vocals sound as if a 30-year old guy would be singing there. No sign of age in sight!

'Yearning To Fly' is the opener of the album with a total running time of more than 45 minutes and a very proggy and calm rock song with a lot of (early) Rush-reminiscences when you take the guitar work and the synthies. It spreads a calming and positive atmosphere and with its very melodic and catchy bridge it is a heart-warming and perfect opener for the self-titled album. The same goes for 'Skyfall' which is a little bit heavier and because of the vocal / guitar patterns in the verses slightly more dramatic. There are some other calmer tracks to find but I will go more into detail about them a little bit later.
The heavier facet of the album starts with 'China' which is the heaviest track on the album and where the crimes of the Chinese government against the Uyghurs and other people are subject. I guess (I just wrote about a song by Asphyx in the past) Six By Six don't have China as prior sales market in focus. The song is pretty heavy and is what you can call a classic hard rock / heavy metal song with a very catchy chorus and some really cool breaks and guitar riffs. Nigels drums sound pretty much powerful here and underline the heaviness of the track. 'Casino' has a nice tropical atmosphere with the guitar solo (which is often repeated) and some other proggy influences that may be originated in the late 70s. Of course that is no surprise when you consider the background of the three musicians. Coming back to some Rush-tunes, 'The Last Words On Earth' is a wonderful arranged heavy song that isn't too difficult to follow even though it has some fantastic twists and turns in its 4:37 minutes. It creates a very thoughtful atmosphere, may it be because of its title, its lyrics or the melancholic parts scattered here and there.

Although there aren't any weak or boring tracks on the album, at least I do have some more favorite ones. And for this I do come back now to one of the calmer tracks. In 'Reason To Feel Calm Again' it is absolutely amazing what the band has performed. Starting with some bagpipe-like tunes that let appear Mel Gibson playing William Wallace in Braveheart before my eyes, the track has this what you could call a classical drama in literature: exposition, rising action with some guitar riffs, the climax with the verses and some really dramatic twists and after that the falling action where bagpipes are played again. 'Battle Of A Lifetime' may be the most melancholic track on Six By Six. The acoustic guitar brings you back into some ballads of the 70s and the rest of the track is also back to these days. It is another very catchy song the guys have written and again the lyrics are also very thoughtful.

So, maybe you got some interest in Six By Six with this review – I just can highly recommend it to you when you like some more progressive sounds combined with heavy metal. For me, this is a very big surprise and I am glad that I didn't miss this release.