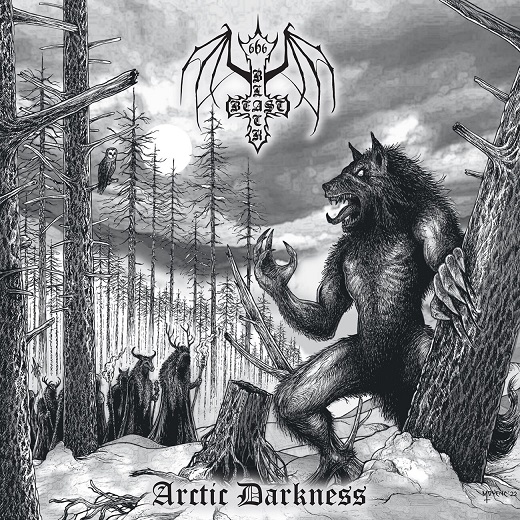 Some things always come at the right time. A salary increase, goals from your own team, the opening riff of “Dirty Deeds Done Dirt Cheap”… I can think of several more. Finnish black metal, for example. Of course, this genre has become a global phenomenon. Nevertheless, there are only two countries that deliver constantly in terms of quantity and quality, Suomi and Germany. Black Beast originated from Finland (if we start from today's borders, who knows what else colleague Putin is planning) and their debut showed two things. These guys do not reinvent the wheel, but they have a profound understanding of the style they play. This cannot surprise us, because the band has been active since 2002, even though their rather poor catalog includes fewer releases than Striborg publishes in a single year. Every now and then a punk- or crust-like undertone shimmers through (the riffing of 'Sadistic Art In Demonic Lust') or almost Maiden-esque leads appear (once again 'Sadistic Art In Demonic Lust'…), but it is 99% black metal what you get when you dive into the fittingly titled Arctic Darkness.

Black Beast uses the usual tools. The artwork may border on infantility, but their musical content shows their maturity in a matter of minutes. This gets inter alia obvious whenever they break out of their typical schemes. Of course, the hammering compositions rank between solid and superb. Especially the ferocious title track surprises with a dramatic part after the first eighty seconds that gives the song a fine additional flavor. Nevertheless, in particular a comparatively calm demon like the heavy, dark and doomy 'Depths Of Damnation' shows the competence of the musicians. They have more to offer than an album which must rely on just one song formula. 'Depths Of Damnation' reflects tragedy and despair without any whiny sequences, but with a great break, atmospheric keyboards and a fantastic melody. A more or less perfect main riff is always a good thing. Those who like the atmosphere of Malum’s “Days Of Slaughter And Destruction” will also enjoy this piece of Black (metal) Beast.

During the straight sections, it is not hard to find some influences of Impaled Nazarene (naturally before their music turned to shit). Maybe Black Beast wanted to show their punk affinity also with the hate-filled outburst that fails to achieve the two minutes mark. Anyway, the guys combine this merciless stubbornness of their role models with individual ingredients. The result sounds like 'Summon The Angels'. Seemingly a straight torpedo, but it is also equipped with atmospheric, menacing sections. So in my humble opinion, the Suomi-gang has penned a strong album, although the ultimate strike, the monumental 'Hymn Of The Freezing Wind' does not mark the crowning finale. A good, never-boring track, yes, but maybe more than ten minutes are a little too much of a good thing. No matter. Black Beast have confirmed the good form of the debut. The production is also going well and so I see no reason to give less than 8.1 out of 10 points. And one final note: Putin, you old asshole, don’t dare to attack Finland. We will survive inflation, the energy crisis if necessary, but a black metal crisis would be the death sentence.