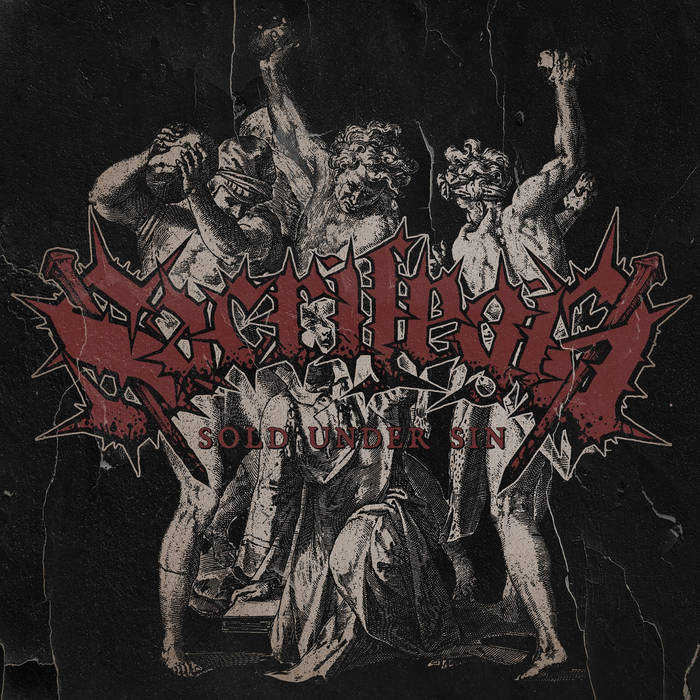 That was quick! Hardly in office, Giorgia Meloni already receives a metal song dedicated to her. 'Reactionary Angel' must be dedicated to the blonde lady who has a very special relationship to fascism. What the hell, reactionary politics are booming right now. But wait... I just heard that the title was not chosen in her honour. It's better that way. Then we can concentrate on the music of Sold Under Sin.

'Cimmerian Dawn' kicks off the EP and indeed, dawn breaks immediately over the listener. Unfortunately, I cannot get rid of the feeling that a less dull production would have been a good idea. It seems to me that the opener cannot release its full potential. Nevertheless, the track marks a nice example of dark art. Furnished with a healthy portion of malice and driven by changing, atmosphere-creating guitar runs, the piece reaches out to you to follow it into deep abysses. There are no signs of progressive metal, although the number of breaks is remarkable. But Sacrilegia manage to present a song with homogeneous structure, no matter how many twists and turns show up.

The opener sets the course for the entire output which clocks in at 20 minutes. Not totally unleashed, but always filled to the brim with aggression, villainy and negativity, the Irish horde races through its self-created wasteland of horror. The dudes avoid stale riffing and bloodless sequences. Okay, 'Sarx And Blood' holds some slightly primitive sections, but the instrumental part at the end, seemingly influenced by Deströyer 666, makes up for a lot. Therefore, after listening to the EP, I sit back satisfied. There is nothing else to listen to but 20 minutes of bludgeoning. But that has never bothered me before. You can put on Rush, Dream Theatre or Sieges Even afterwards if you really want to (I don't).

Those who like sinister (Australian) music like Armoured Angel or the already mentioned D 666 will enjoy this work. Sacrilegia have taken some steps since their debut which already showed them in good shape. This does not mean that the music has become better (it’s more or less on the same quality level as before), but more various and maybe it holds ten percent more depth than the debut. By the way, Giorgia is also a debutant in her new job. But I don’t think that political observers will give her work a rating similar to mine for Sold Under Sin.