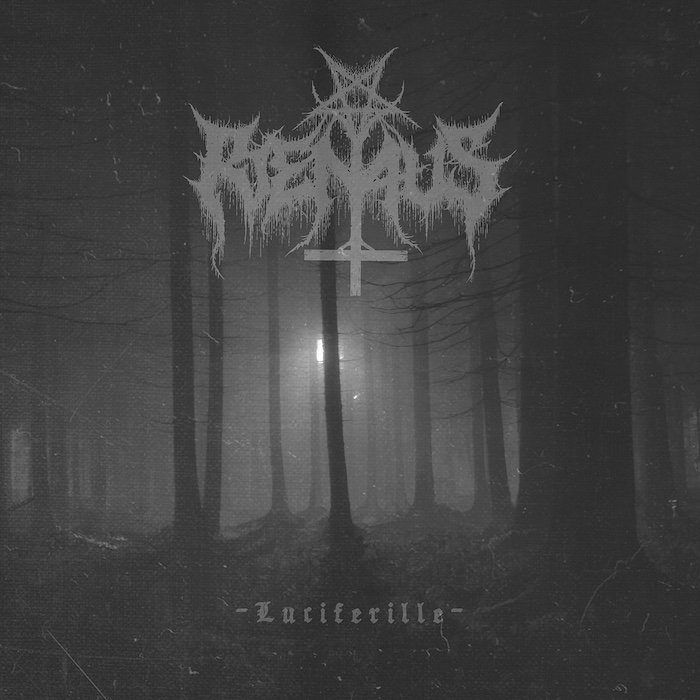 Does pure black metal have a purifying effect? Sometimes I think so. It makes me forget the daily shit and allows me to take a short trip into another dimension. Of course, there are some journeys that do not end in an outstanding experience, but what can go wrong if you have a Finnish tour guide? Satan says: not much. Rienaus does not mark an exception in this context.

Okay, often their level of individuality tends towards zero, both in terms of musical content and production. The mix is utterly raw. Every corrupt politician will love it due to its lack of transparency. In particular the fast sections – and there are several of them – challenge the listener and demand full attention. Otherwise you will only recognize an untamed noise. The snare is audible, but always at risk to drown in the snowstorm of the guitars, while the vocalist delivers long-drawn-out cries in feverish delirium. As always when it comes to Finnish lyrics, I do not understand a single word, but he uses his voice more like an additional instrument anyway. Either way, he expresses a demonic attitude and it is hardly possible to crush the audience with a more hateful approach. Of course, you also get a portion of monotony here, but come on, what did you expect? Cheesy Italian power metal choirs?

Yes, some run of the mill parts can be found here and the weak 'Kuilu' suffers from its aimless guitar lines. Wannabe-hypnotic, but alas only boring and expressionless. The intro also does not add much value to the output, but the remaining material says hello to Behexen, Malum or Azaghal (new album in 2023, wonderful!). Speaking of Malum, 'Aänet Yössä' is no new “Son Of The Dracul”, but still a great closer. Some bone-chilling guitars struggle with mega-heavy sections until both elements coalesce into one big whole. Rienaus are talented song-writers, already the first “melody” of 'Uhrattavaksi Siunattu' reflects the rare combination of hate and melancholy. The band is able to give its pieces a proper depth – not always, but often enough to give the album a pitch-black and abysmal feeling.

Apart from the simple yet impressive artwork, Luciferille does not deliver a family portion of atmosphere, but it scores with this very welcome component of devilish insanity. Maybe it is true that the incredible cries of the Silencer psychopath remain untouched, but Rienaus have definitely no reason to hang their heads in shame. Their high velocity sections leave a trail of devastation and in rare moments a spooky guitar appears, for example in 'Pedon Merkki' after 45 seconds. By the way, this is a real killer song. Moreover, the abrupt ending of the title track provides a little surprise; the only one on this full-length. Never mind. Those of you who want to be the most fearless guys in their neighbourhood start with the murderous 'Saatanan Valtakunassa', everybody else with an affinity for typical Suomi blackness will not be disappointed as well.