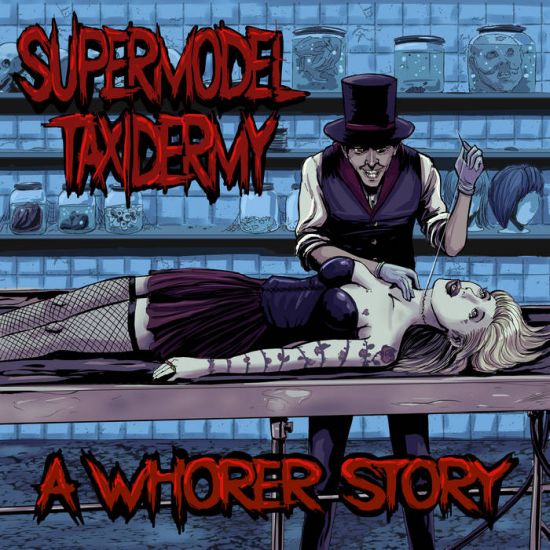 Supermodel Taxidermy is not the catchiest name, right? But their music makes up for this. The band originates from Canada, a country with a great thrash metal history, Razor, Sacrifice, Piledriver and many more. But it has also brought bands to light that mixed thrash with speed (Exciter) or with extreme punk (early Voivod). The three protagonists of Supermodel Taxidermy remember this crossover tradition and maybe it is no coincidence that their band name has the same initials as Suicidal Tendencies. Some influences of Mike Muir and his brothers in spirit cannot be ignored here. To translate the last sentences for younger fans: if you like Dr. Living Dead!, you can check out A Whorer Story.

But the supermodels do not slavishly follow the well-known veterans. Sometimes they leave the punk-mined borderland and celebrate pure riffs of steel. 'Chrysalis' awaits the listener with nearly doomy guitars at the beginning. Nevertheless, the dominating ingredient of the trio’s music is casual thrash that transports a feeling of a life on the road. So do not expect a stereotyped, high-speed thrash opener. 'Martyr Complex' reveals its strength by stoically sawing guitars and mid-tempo rhythms. The first speed eruption is called 'Forgive Or Forget'. Ten percent more aggression and f**k off attitude and I would almost label it as crustcore. However, it shines with a rapid elegance and a good flow that needs no tempo changes to appear to be dynamic.

And what about the production? Well, all systems go. The pleasantly heavy guitar tone rules, but the natural voice and the organic sounding drums do not lead a shadowy existence. Even the bass guitar has something to say. No doubt, the mix serves the compositions excellently and therefore highlights like 'Mc Murray’s Finest' shine in full bloom. This track delivers nothing completely new, but simple yet powerful configurations never get stale. Moreover, it is nice to experience that the following 'Better Humans' runs in the same direction.

23 minutes are no full-length, but they give us more than just a cursory impression of the Canadian’s understanding of metal and their manual and compositional skills. Given these facts, it is great to see that no serious defect occurs here. Okay, 'Chrysalis' shows some superfluous fat and the selection of artworks is strongly improvable, but after the last tones of the more than solid closer, I have the feeling that Supermodel Taxidermy can enrich our scene significantly. Their first full-length will show whether my instincts were right or wrong. Nevertheless, already this output illustrates one more time why insiders like Darkthone's Fenriz appreciate "Canadian Metal".