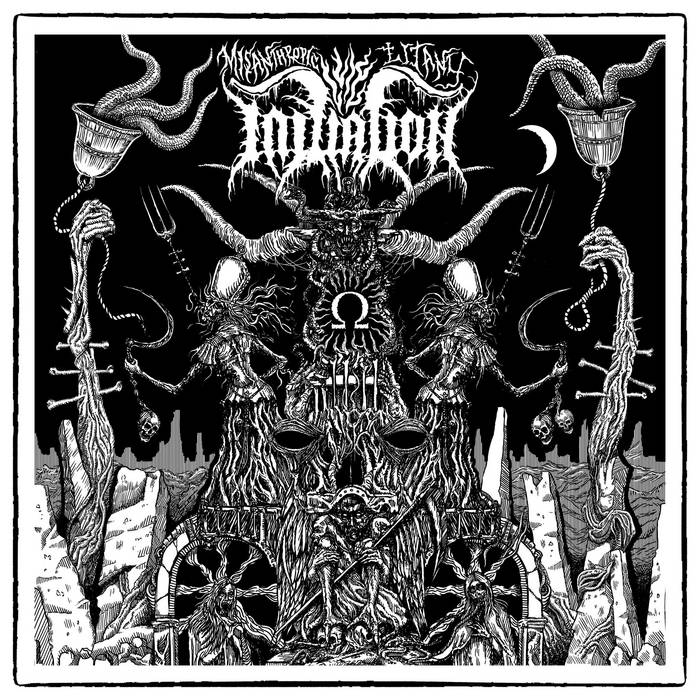 Type: Full-Length
Release Date: October 1st, 2020
Label: Mara Productions
Genre: Black
1 Misanthropic Litany
2 The Thunder Of My Roaring Howl
3 His Wolves, His Hearts
4 To Bury All Life
5 The Endless Rivers Of Fire
6 Nocturnal Ascendancy
7 Arise From The Ashes Of Battles
8 The Rite Of The Black Flame

Russia is an interesting country when it comes to black metal. Most hardcore metalheads point out how Russian black metal tends to be very atmospheric, with a harsh and cold sound and very, very oppressive and hateful, (sometimes to an unsavory degree), but there’s also a crop of bands that go in different directions, as its the case with The Initiation, and their 2020 debut album Misanthropic Litany, which was released by Mara Productions.

The Initiation are a relatively fresh band, first formed in 2015 by various veterans of the current black metal scene in St. Petersburg, aside from their debut full length they had an EP. One of the best aspects of the band being a fairly new entity is both the limitless potential and energy, and they display both on this very record. The album opens strong with some industrial ambiance, which is a prelude to pure black metal, and the band are able to keep the intensity and aggression from start to finish. This is both one of the album’s better qualities but also a bit of an issue. The album is relentless and unforgiving and there’s no breathing room whatsoever, and while this doesn’t really bother me, this makes this record a black metal album, by black metal fans for black metal fans through and through. That being said, the production does alleviate some of the musical punishment, so if you’re not into black metal this record will be a hard sell, the other problem with that part is that a seasoned metalhead will probably be unimpressed with this record, some might even scoff at the clean production but on both counts that’s simply a matter of preference.

With that out of the way, one of the most interesting and enjoyable aspects of this record is how while the band don’t have the signature cold atmospherics their compatriots from the past and present have, the band absolutely do not discard the hateful melodies and oppressive riffs. Whole album is coated with them, moreover, the band’s sense of melody is perfectly incorporated into what’s otherwise a very aggressive record, and on top of that, the band manage to also incorporate some classic heavy metal groove and some folky licks, and all without the band switching from black metal. The production actually really helps them in those regards, as the clean sound gives the guitars and bass a piercing effectiveness; this also applies to the drums and vocals, the latter is forceful but retains a natural sound with very few effects, and the latter are utterly demented and unhinged, and any familiar with Void WHRT’s other projects would surely expect. And the band fully sell their brand of hateful black metal by operating as a single unit, not only are the performances tight and consistent, so is each song, and the end result speaks for itself.

The other criticisms that I have to point out of this record is first the pacing. While the album’s length has an average 40 minute runtime, and all the songs last between 4 to 5 minutes each, the simple compositions and repetitive sections tend to drag a bit, which makes some of the tracks feel longer that they actually are. The band manage to counter that with their skill and excellent performances, but it is noticeable, also, that issue goes in hand with my second criticism which is how the band’s sound and vibe is very eerily reminiscent of Inquisition, now it will be quite obvious the band aren’t just copying that band, for one, Void WHRT isn’t doing the frog-like vocals of Dagon and there’s also an audible and very well played bass, courtesy NRVS, but what is reminiscent of Inquisition is specifically the guitarwork of Dispirited, especially in some of the mid-paced sections, as he employs bending strings and broken chords, granted, these techniques aren’t exclusive to Inquisition, and the band as a whole do a lot more with them and succeed more often than not, which does give me a good feeling that in future records they’ll shed their influences and continue carving their own path.

Best tracks: 'Misanthropic Litany', 'His Wolves, His Hearts', 'Nocturnal Ascendancy', 'The Rite Of The Black Flame'