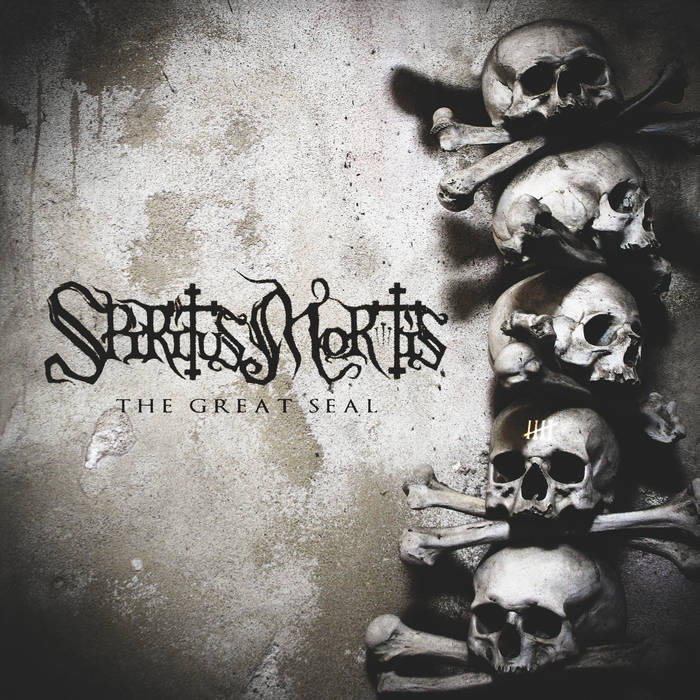 The year is slowly at its end and it is almost time to think about your favorite albums in the different metal genres. I already found my faves in thrash and death (Protector and Slaughterday), now it's necessary to focus on the doom metal genre. The year wasn't too rich of doom releases (or I didn't get them) but the autumn (which is the best season for doom in my opinion) has two promising albums, namely Spiritus Mortis at the end of September and Candlemass in the midst of November.

Now here we go with the latest album The Great Seal by the Finnish doom legends Spiritus Mortis which is their fifth one in their 34-year-career. First of all I have to state that their new vocalist Kimmo Perämäki really fits very well into the band and gives the songs a very special touch with his deeper and slight raspier vocals than Sami Hynninen (maybe better known as Albert Witchfinder of Reverend Bizarre) had on the previous albums. The production is very powerful and clear so that there aren't any flaws to find here.

The Great Seal doesn’t start with a slow, heavy-laden riff picked as its predecessor The Year Is One did but with a very catchy Candlemass-like opener called 'Puputan'. It spreads a very groovy, warm and epic atmosphere and with a lot of fantastic melodic parts which reminds me a lot of the Robert Lowe-era of the Swedes. Both guitarists do a great job here (and I will come back later to them). Is this still doom or already not – this is the question. Well, with 'Death's Charioteer' or 'Skoptsy' there are classic doom songs to find here, too. They are creepy, very dark and slow songs that spread a certain Black Sabbath atmosphere but combined with this very special Finnish sultry and slight depressive basic mood. 'Martyrdom Operation' however is a very casual, cool rock song that starts with some pretty heavy ZZ Top vibes at its beginning. The chorus is quite simple and catchy and despite of the simplicity of the songs it turns out to be a really great banger. But the best song on the album is 'Khristovovery'. It doesn't start very spectacularly but (and now I'm coming back to the guitar work) what the guitarists are conjuring in the midst of the song is something that Tony Iommi wouldn’t have done better. I haven't heard such a fantastic and majestic parts for a long time. The riff starting at 4:30 is absolutely amazing and what is happening at 5:10 reminds me pretty much of the stairway painting of M.C. Escher – you don't know where the riff began or where it will end, this is quite hypnotic. The shortest song of the album with a very impressive anti-war-message is 'Visions Of Immortality'. This one is a mid-tempo stomper that is very entertaining and again quite catchy. 'Feast Of The Lord' might be the most emotional song with some very tragic and sad arrangements which again show the so much underrated abilities of this band. Closing with a very slow and atmospheric song called 'You Are A Witch' the band declares the battle for the best doom metal album of the year as opened – let's see if Candlemass are able to top this fantastic album. Because I haven't heard “Sweet Evil Sun” yet I “only” give it 9.9 of 10 so that it can be topped by Candlemass. Well, if not, I am going to change it into a 10 (I hope you can follow my logic here).