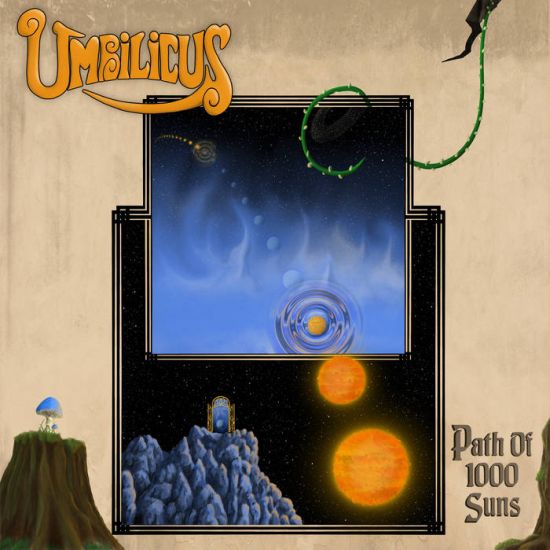 What kind of music do you expect when you hear such illustrious names as Paul Mazurkiewicz, Taylor Nordberg, Vernon Blake or Brian Stephenson? I guess nothing else than some fantastic old-school death metal. But this is absolutely a wrong suggestion. Umbilicus is the new band of these four guys (it was a long-time dream of Paul) and maybe you can already foresee it on the cover – this has absolutely nothing to do with death metal.

From the first tunes of Path Of 1000 Suns it becomes pretty clear that the ways goes straight into the rock and heavy metal music of the 70s and the kind of music that is related to this. 'Hello Future' is a pretty groovy mid-tempo rock stomper in the vein of Led Zeppelin that spreads a lot of positive energy and good vibes. The song has a lot of energetic rock riffs and if the future seems as bright as this song, I would like to welcome it for sure. But the four musicians can also wilder in the doom metal – just listen to the beginning of the title track which is quite dark and gloomy. This riff could have also been on one of the first four Black Sabbath albums. But instead of playing a sheer doom song they mix some more pop-influenced vibes in it which sometimes remind me of (don't shoot me for that) Lenny Kravitz (I will stop name dropping now however). 'Stump Sponge' goes more into the stoner rock corner combined with some grunge influences and another fine rock song with a lot of energetic vibes. 'Gates Of Neptune' starts very calm and relaxing and let you make yourself feel as if you were drifting through time and space. After about two minutes however, the gates of Neptune open and suck you in with a more increased speed and heaviness just to spit you out into the open space at the end of it. Again, a lot of rock bands may have been an influence for this very entertaining song.

In the midst of Path Of 1000 Suns Umbilicus become much more groovy. 'Life On The Sun' isn't that bulky (which isn't meant in a negative way here) but a very catchy rock song with a lot of cool hooks and galloping drums. Maybe this could become one of the faves for the fans because of the easy-listening atmosphere. 'Travel' is the fastest song on the album with a lot of breaks and twists which again has some Black Sabbath vibes in the guitars and a very casual solo, too. After drifting a long time from Neptune's gates through the endless space we finally reach the Kuiper Belt at the end to be gathered all here. The last last track 'Gathering At The Kuiper Belt' is a very dramatic and epic song with many breaks, tempo changes and a lot of surprises during its six minutes. This is a really worthy closer for a really convincing debut album.

If you like some heavy rock, 70s inspired music, Path Of 1000 Suns might be the right thing for you. If you just choose the album because of the musicians – be forewarned! Expect the unexpected!