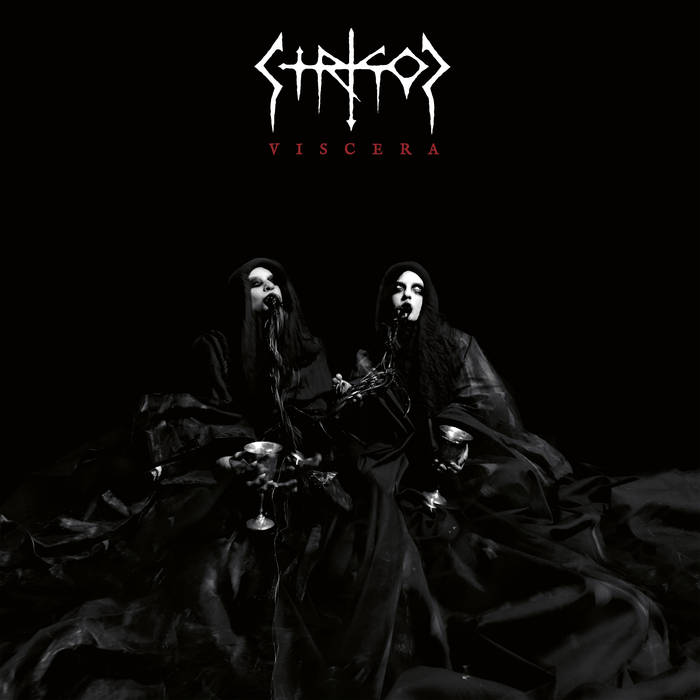 Viscera is the second album by British deathers Strigoi. I have to say that I knew it would be released in late 22 but when it popped out in my inbox yesterday I was pretty surprised to see that it came already out on September 30th. Well, I'm glad that I got it because the album is musically adequate for my mood these days. If you would ask my family you would get as response that this doesn't go along with too many positive connotations…..

Well, Viscera has become a very slow and hateful album that doesn't leave any space for light or positive emotions. It is a perfect soundtrack for the fucked-up state that our world is in in 2022 (and probably far beyond this year). The songs are pretty slow and peppered with malevolence and darkness in every single tune. Here and there you can see the past of guitarist Greg Mackintosh when he uses some very old Paradise Lost riffs from their debut album but this is only marginal ('United In Viscera' is an example for that). The 10 tracks with a total running time of about almost 47 minutes offer a lot of brutal doomy parts with remorseless sawing guitars and thundering drums and the uncomfortable and morbid atmosphere is additionally emphasized through the sick gurgling sore throat of Gregs vocals. In some parts you can find some crust elements, too and with 'Napalm Frost' the quartet has also a very fast death metal track at the start but the main focus lies on the slow all mowing-down melodies. The madness that Strigoi second album is spreading and is often underlined with some disturbing noises or samples that intensify the negativity of this output even more. Tracks like 'Hollow', 'Redeemer' or 'Bathed In A Black Sun' with their absolute hopeless lyrics are top notch if you want to get depressed (or already have something going on ). Do you need an example of the lyrics? (taken from 'Redeemer')

It is no easy listening stuff that the Brits composed and with all the rest it tends to be pretty challenging. You won't be able to find a niche to settle down in your comfort zone anywhere here. But I have to admit that Viscera may be reflecting the zeitgeist of 2022 in a very matching musical way: brutal, gloomy, hopeless, desperate and hateful. This album is pretty much like a Death Eater. It doesn't leave you happy on your couch or wherever you may consume it; it sucks you in, takes all your positive emotions and fills you with feelings you rather don't want and then spits you out after you were tied in the 'Iron Lung' unable to move or speak. Uaaargh, what a nightmare!