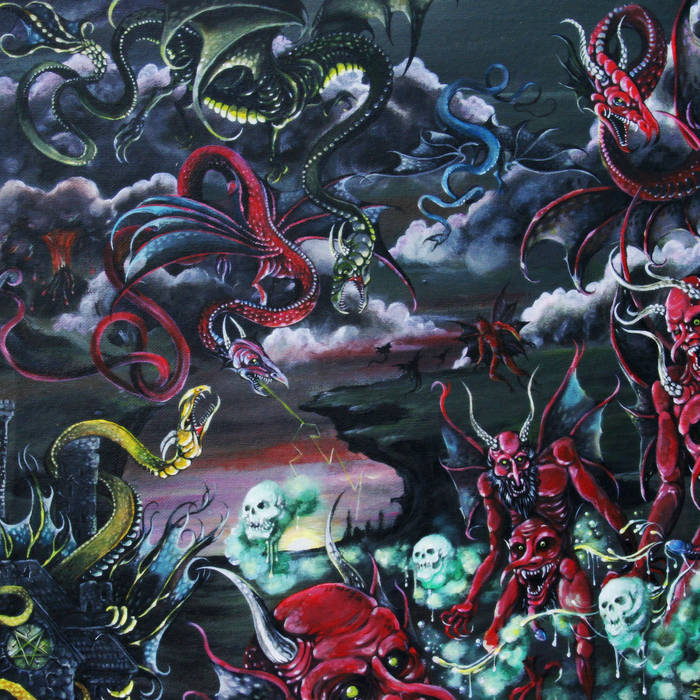 Blackened thrash metal seems to be having a resurgence as of late all around the globe, and that’s a very welcomed trend since many bands are not just taking a stab at this furious style of metal, but are also starting to take it to new dimensions. Today we have one such case with Philadelphia based cult, Daeva and their long awaited debut record Through Sheer Will And Black Magic..., released through 20 Buck Spin.

Daeva is indeed a new name but lineup features veterans of the Philly metal scene, primarily members from doom cult Crypt Sermon and even former Infernal Stronghold vocalist Eddie Chainsaw (aka Edward Gonet). The band first made their mark in 2017 with their debut EP Pulsing Dark Absorptions, which displayed really good black/thrash but not much else. Although, as a debut EP and first try it was perfectly adequate, fast forward 5 years and the band unleashes their new opus and to say the debut is miles better than their EP as well as an excellent album in its own right would be an understatement.

For starters this is indeed black/thrash metal in all its demonic glory. If you want blistering speed, face-melting riffs and unhinged vocals, Daeva’s got you covered. The album opens with an ominous ambient intro that actually sets the mood for the entire record (we’ll get to that), and afterwards its a destructive onslaught at eleven that never lets up from beginning to end the record is pummeling and merciless. But, and this is where the band have truly outdid themselves from their EP, is how they take all the elements that make good thrash metal and both modernize it while also adding an old school edge that’s reminiscent of early Bathory and Kreator, and without discarding the black metal influences. And by that I mean this isn’t just a black/thrash record full of speed and fury, it’s also a dark, foreboding and sinister in all the right ways. This is what I mean by how the intro track sets the mood, the atmosphere the album has alongside all savage aggression, a real sense of atmosphere that gives the whole record that extra something that a lot of black/thrash bands tend to discard in order to make fast and brutal music, but Daeva succeed in having that without discarding the atmosphere. And that atmosphere is a very demonic and ritualistic one. The vocals of EG also do a good job in selling that, and in some areas the music reminded me of the first two Behexen records, and in a totally positive way. If anything, the band have a really good grasp of the subgenre as well as a keen understanding of what makes black metal click for a lot of people, while also delivering the extremity and, dare I say it, fun thrash metal.

In regards to the technical aspects, founding member Steve Jansson is the MVP of this record, and the guitarwork is what truly sells the music. Granted, as a member of Crypt Sermon, Jansson’s riffage was always guaranteed to be excellent, but for this record the dude is a truly different league entirely. From the solos, to the dissonant melodic passages on top of the killer riffs, anyone who claims to love guitars must hear this record. But that’s not to say the rest of the band aren’t up to par, on the contrary, they’re all performing in top shape, Eddie Chainsaw of course is also a major highlight due to his stint at Infernal Stronghold, and his dry wailing vocals as mentioned earlier give the album its demonic atmosphere. The same can be said of drummer Enrique Sagarnaga, also from Crypt Sermon and underrated black metal act Ashencult. His drumming is also a major highlight, as he’s able to display blast beats, fast double bass and d-beats like any good blackened thrash band must have, and it's impressive how his drumming is consistently intense and unrelenting. The last aspect but also my one and only criticism is the bass. Now Frank Chin is an excellent bassist on his own right, but because of the production and how overwhelming the guitars, vocals and drums are, his bass lines aren’t as prevalent for my taste, except for a bridge section in the track ‘Polluting The Sanctuary’ where you hear it in its full glory. To give credit where it's due, Chin succeeds in keeping up with the guitars and drums, so overall, the bass work is on par, it’s only my own gripe of it not being very prominent in the mix, but I digress.

All in all, Daeva have delivered an outstanding debut where they improved upon their EP while also evolving their sound to be a perfect synthesis of both aggression and atmosphere. It truly is bands like this who exemplify blackened thrash metal and carry the banner of early Bathory and Nifelheim.