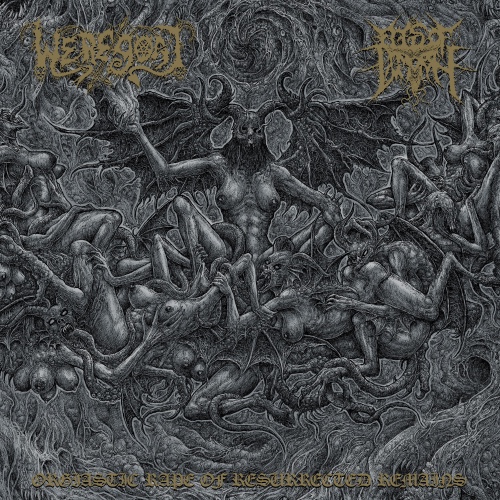 A double dose of satanic sonic violence for the masses, courtesy of US perverted warmachine Weregoat and from the land of cheese, chocolate, cuckoo clocks and shady financial dealings, the oddly monikered Eggs Of Gomorrh. Both deliver their own take on the bestial black/death metal genre, and allow me to tell you that they most certainly do not disappoint.

Proceedings kick off with the most important reason for me acquiring this release, Weregoat. For those already familiar with them there will be no real surprises on here, they do what they are supposed to do: deliver a rough and brutal take on the genre. Situated somewhere between Blasphemy and Archgoat, they go from lurching pounding sections to more uptempo parts and back again. They may not be the fastest or most technical bunch on the block, but their caveman stomp approach works well enough indeed. A grimy yet clear production gives the music the desired punch in the face, and the devilish perverted spoken samples complete the picture.

Now Weregoat may have been the reason I got this one, the surprise on here is without doubt Eggs Of Gomorrh. I had heard their name mentioned here and there but never took it unto myself to really go check them out, so this was my first taste of these eggs, so to speak. Playing more in a blackened death metal field than their compatriots Weregoat, Eggs Of Gomorrh distinguish themselves from colleagues such as Adversarial or Nexul by injecting their music with hefty doses of dissonance, copious amounts of breaks and dark riffing, giving the raging death metal a deranged fusion feel. In this approach they remind me of Japanese death metallers Defiled, who utilize a similar take on their music, but a disturbed early 00's Behemoth is probably not far off the mark either. You might be tempted to think this is an unbearable jazz metal take on the style, but Eggs Of Gomorrh manage to keep it all interesting throughout, never losing themselves in their oddness, but expertly crafting a handful of dark death metal tracks that are as adventurous as they are interesting and, above all, extreme. Their four tracks are my favorites on this split, so as a first impression, they made this one count.

This is a split release that is totally worth your time. It's got awesome music and as with all Iron Bonehead releases the artwork and layout is spot-on as usual. A mighty release from two great bands on an awesome label!