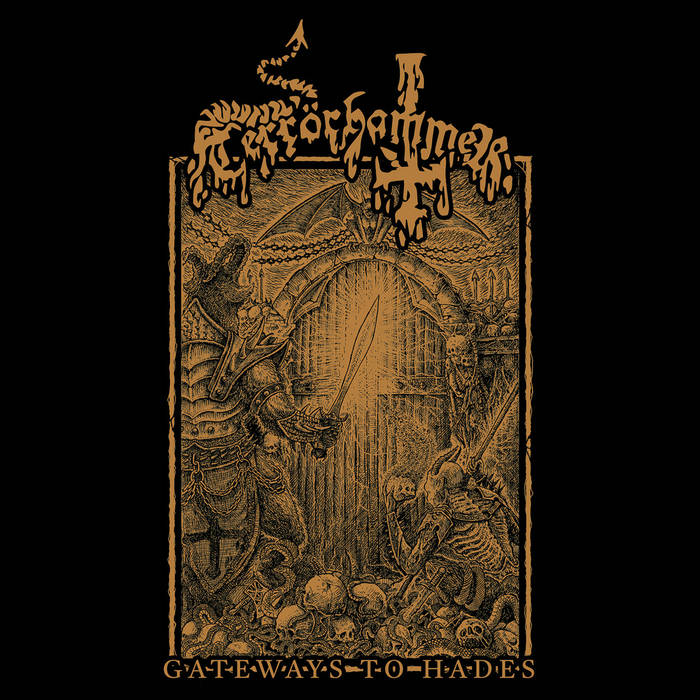 Terrörhammer is a highly respected name in the Serbian metal scene, and over the years they've become a cult band thanks to their reputation. Their well-received status gained them fans worldwide and positive reactions to both their discography and their live shows, but even after several lineup changes, they've still managed to uphold their position and push further with their oldschool sound. Now we've been blessed with an unholy gift in the form of their second full-length album Gateways To Hades, released via Osmose Productions.

Their previously released full-length album Under The Unholy Command still remains their black/thrashing magnum opus and to take its place is all but an easy challenge. Gateways To Hades on the other hand is a different beast, with songs like 'Blizzard Of Blood', 'The Interceptor' and 'Tronized Goat Master' that are black/thrashing bangers all the way through, while songs like 'At Dawn We Attack', 'Gateways To Hades' and 'Midnight Patrol' have more heavy/speed metal oriented guitar riffs, filled with a dose of catchiness and rock 'n roll. I don't consider this as a downside in any way. The evil and perverted heavy/speed metal energy is more than a welcome addition to Terrörhammer's established sound, though for some people it might either be a mixed reaction or a hard pill to swallow, depending on what they prefer. The highlight of this album beside the awesome riffs and banger tunes are the solos, especially on tracks like 'Blizzard Of Blood' and 'The Interceptor', with guest musicians Tamás Buday and Dimitrije Čuturilo, adding their flavor to this devilish brew.

Overall, Gateways To Hades may not be as great as its predecessor Under The Unholy Command, but I still love it for what it is. It's an awesome banger of an album and no matter the different approach to the sound, Terrörhammer still remain quite faithful to their true oldschool metal roots. There isn't a single bad moment of music to be found on this album or anywhere in their discography, especially not on killer songs like 'At Dawn We Attack', 'Blizzard Of Blood', 'Transylvanian Whore', 'Midnight Patrol' and 'Tronized Goat Master', which by far have probably left the strongest impression.

Terrörhammer is a gift that keeps on giving, and the time is good as any to check out their new album Gateways To Hades. Hail to the Hammer of the Terrör Cult!

My first point of contact with Terrörhammer was In The Name Of Hell and I still like this EP a lot. But either my memories betray me or the dudes have lost some percent of fury and brutality. The first regular track 'At Dawn We Attack' fails to convince me. It is fast and slightly catchy, but it sounds too smooth. The riffing seems to be inspired by the early Savage Grace, it lacks edges and corners. Of course, we get this devilish nagging, somewhat hoarse, raw and malicious. It gives the material a dark colour, but the guitar lines do not convey the necessary amount of filth which is needed when it comes to really recommendable black thrash. Honestly, the six strings create rather speed metal than thrash, not only in more or less melodic solos ('Transylvanian Whore').

To avoid misunderstandings, Terrörhammer do not sound like Savage Grace. Hordes like Nifelheim are much more comparable. Yet this vile, insidious and perfidious element that the Swedes present with black elegance is missing here. 'Blizzard Of Blood' and 'The Interceptor' are the first songs that can play with the big guys on the school yard in view of their high density and offensive character. Do not ask me why they have put their rather lukewarm and comparatively airy compositions at the top of the song list. Anyway, I am happy to see that the dudes are still able to swing the axes competently. These tracks are simply constructed, but not primitive and pretty catchy but, of course, not commercial. Too bad that they leave this trail of malicious black thrash again. 'Midnight Patrol' begins like an Accept song with unsuitable vocals, contributed by a sick raven. Things do not get better as the song progresses. A lame mid-tempo composition without any dynamic elements does not make my day.

Production-wise, the album gives no reason to lament. The basic guitar tone has a solid degree of sharpness and everything is well balanced (as long as we are able to ignore the usual problem called missing bass). But even the best production cannot work as a substitute for outstanding riffs and this component remains a pretty rare asset on Gateway To Hades. At least, in the last few metres, Terrörhammer pick up the pace again. 'Inside The Nuclear Tomb' suffers a bit from its slower oart in the middle, but the main riff is the musical setting of everything that knows no mercy. The equally furious last track closes the book and I regret that the dudes did not record just another EP, of course only with the four songs I like. Given the full-length format, Gateway To Hades has to accept the reproach that it offers too many lows to advance to the top.