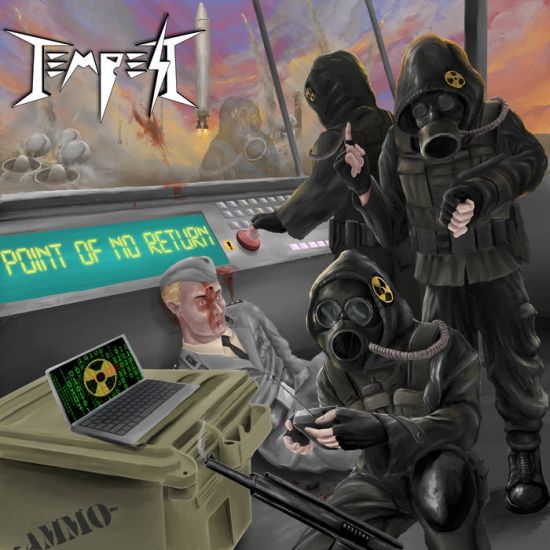 Aachen is the hometown of Holy Moses, but it is also an old “Kaiser-City” and known in Germany for its elegant horse tournaments. Of course, the only relevant export from Aachen has been Sabina’s wrecking crew so far – but now Tempest, a bunch of thrashing maniacs, peek around the corner. They are young, obviously filled with energy to the max and they follow, voluntarily or not, the down-to-earth DIY approach. Moreover, they suffer from the scene-typical weakness for rather dubious artworks, but as far as I recall, thrash metal was invented for our ears and not for our eyes. So let’s ignore the visual aspect of Point Of No Return. It makes much more sense to spend our full attention to its melodies, riffs, drum patterns and vocals. I cannot say it differently: just like Skeleton Pit or Mortal Infinity, Tempest are a preventive kick in the ass of the scene so that no thrash metal maniac is at risk of accidentally falling asleep.

As young as the boys are, as old is their style. I almost turn 37 years younger when I hear their music. This is thrash metal the way it was meant to be. A “Piranha” invites you to a “Chalice Of Blood” and tells you something about “The Legacy” of some legends who were “Plunging To Megadeath”. You see this tradition-conscious material cannot be a bad thing. Tempest, thumbs up, really have a knack for refreshing eighties thrash. They never sound stale, the riffs are not old friends we have met a lot of times before and they manage to lend the material an individual note without hurting the guidelines of the pretty narrow-minded scene. Of course, they are not the first horde that intersperses a casual mid-tempo number, but the quality of 'Through The Pain' makes me wonder. Who the hell did create this song with this perfectly flowing lines, the catchy yet metallic chorus and the highly expressive and powerful Chuck Billy-like voice of the lead vocalist? Speedy rhythms are a core competence of Tempest, but they are also able to present slower tempos in a very impressive way.

Tempest’s song patterns are rather conventional than progressive and every now and then they really dive deep into the past. For example, the instrumental part of 'UltraNation' flirts massively with some early Slayer songs. So what, the spooky intro, the rasping guitars and (once again) the catchy chorus make this piece a real neckbreaker. The robust 'Protector, Pretender', placed somewhere between “The New Order” and “The Ritual” (Testament), is also crowned by its chorus and given this situation, nobody needs to fear that the band runs out of ideas at the end of the album. Okay, 'The Backwater Gospel' is somehow going nowhere, but this remains an isolated case. Basically, the axes are swung wildly here until the triumphant end and the razor-sharp riffing of the final (title) track has a certain potential for addiction. This is not least due to the production. 'Point Of No Return' proves evidence that transparency and sterility can be completely different things. The guitars are cutting violently, drums and vocals have enough space to reveal their full force and the bass guitar is, well, probably there, but it does not shine with omnipresence.

No doubt, Point Of No Return is a fantastic thrash metal blast. It makes no sense to speak about single highlights, because almost every song has a mind-blowing effect. Nevertheless, I need to mention 'Unbroken', a more or less perfect killer with double bass hammering during the outstanding verses. The chorus also hits the bull’s eye and even the somewhat hectic high-speed parts do not hurt the song’s titanic overall impression. This jewel even surpasses the very strong, straightforward opener 'Fire Will Judge' which strikes like a torpedo. So what is left to say? I did not speak about the solos so far, but believe me, they are also great, sometimes a bit melodic, sometimes ferocious. Shit, this works definitely deserves a better distribution, because I am sure a lot more people would like to hear what Testament would sound like in 2022 if they had stayed true to themselves and lost none of their fury. Either way, “Kaiser-City” Aachen has not seen an imperial crowning for a long time. But at least no emperor with halfway good taste in music would run Tempest out of town.