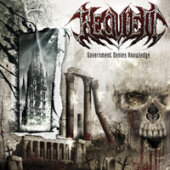 Honestly speaking, I am not familiar with the whole discography of Requiem, a band that originates from Switzerland. I emphasize their origin in order to make clear that they are not from Sweden, although their musical approach has much in common with the death metal legions from the Scandinavian country. Requiem also play vehement death metal and some morbid lines seem to be stolen from the dungeons of formations such as Grave. But the dudes from Central Europe do not need to take a jealous look at the work results of other bands. They create their own form of heavyweight mid-tempo parts, brutal blast beats sections and everything else in between. To call their approach highly original would be a lie. The leads at the beginning of "Signal Zero", for instance, have a lot in common with typical Bolt Thrower tunes (and yes, I am aware of the fact that Bolt Thrower do not have Swedish roots.) But we all know that the guidelines of the lethal genre do not allow much wiggle room. Thus, a certain number of similarities to the outputs of some competitors from other countries cannot be avoided.

Yet Requiem do not try to score with predictable tunes. "Diary of a Damaged Brain", my personal favourite and therefore logically and in all objectivity the best song, delivers an apocalyptic hardcore touch and the sinister chorus seems to be supported by the early Napalm Death. Just watch out for the insane "of a" screams that ennoble the chorus line. It is no exaggeration to say that the Swiss berserks hammer the title in the head of the listener. These screams stand in sharp contrast to the typical growling of the lead vocalist and the emotionless voice that appears inter alia at the beginning of the song. Its profile is completed by nightmarish riffs and deadly breaks. Unfortunately, this song is second to none. There are more good tracks, but none of them delivers this fascinating mix of insanity, brutality and vileness. Anyway, the album provides a dense and powerful dose of gnarled death metal. Songs like "Extinct by Evolution" or "Inconsistent Consequences" do not lack of pressure and they are truly not at risk to disappoint the fans of the genre.

Between these basically good tunes and the aforementioned highlight stands "Bloodcult". It reflects one of the strengths of the musicians. They are able to compose bulky riffs while keeping an eye on a good flow simultaneously. I am not totally fascinated by this formula, but I like it and it has an extraordinary touch. By contrast, the sound of the album shows a very generic approach. One can expect the typical death metal sound and, fortunately, it is a vigorous, transparent and mighty production. Thus, Requiem have not made any serious mistakes while writing and recording this output. The double strike at the end underlines this statement. "Setting the Score", levels the soil with merciless riffs and blast beats, but it holds tiny melodies as well. "Two Sides Within", the final eruption, brings the album to a furious end. In all fairness, I think that Swiss death metal has never sounded better since the early days of Hellhammer.