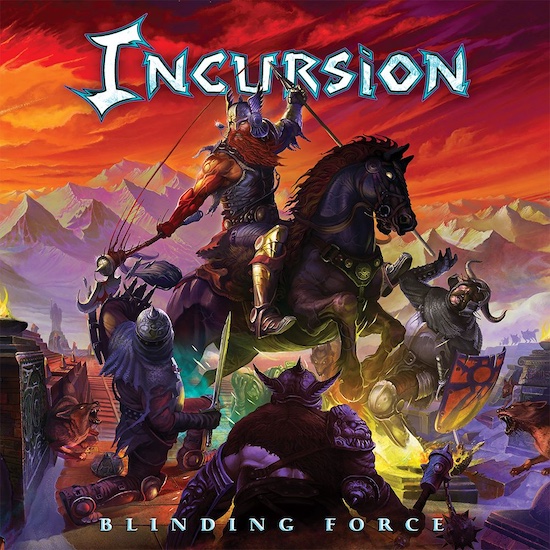 And I heard the sound of Incursion's Blinding Force and I was compelled to say things about it.

You know when you take a long break from metal or just anything in general and return to see what's changed (if any); have things progressed, stagnated or regressed?, and with pleasant surprise your momentary return was worth it. That's the general consensus formulated after hearing this veteran band reunite and take on the traditional metal underworld with Blinding Force. The crusaders behind the instruments sound as though they have a purpose that must be fulfilled at all costs.

The first two tracks are sort of appetizers for what's to come. Not to say they are bad or lack that traditional heavy metal umph, rather they take you to the battlefield to witness the first kill, but then the big swords emerge from the heavens with 'Running Out' and 'The Sentinel'. The former shakes up the arena with a thumping groove and folded fists lead by a catchy guitar lead while the latter puts on exhibition the band's doom metal expertise, capturing an air of epic heavy metal while conjuring an ominous atmosphere as they explore and tell stories of 'The Sentinel'.

It's with these two tracks the gears truly begin to work as the band bring their muscle to the forefront of the exhibition that steadily grows in momentum with another instrumental triumph called 'The Rites'. Paired with 'Master Of Evil' (that reminds me of early Iron Maiden) the album comes alive with its character pulling no punches in delivering strong guitar work and powerful drum vocal combinations. By now it was only a matter of time before the peak of the Blinding Force manifested.
And like a blaze of glory we're offered perhaps the best written piece on the album in the form of 'Strike Down'. Showing off epic doom metal, and a mid era Iron Maiden-esque lead up to the conclusion. Hands down the best guitar solo on the record, it's got a building tempo and a decent sense of melody. Speaking of, the more melody driven tracks on Blinding Force are easily the strongest; it is clear that Incursion excels more at mid tempo than the agile sections on here. Take 'Riot Act', the closing track on Blinding Force and you'll hear the difference in depth hence the slower tempoes really allow Incursion to express themselves more thoroughly than on those quick statement driven types of songs.

At the end of Blinding Force you get the sense that your time spent was well worth the while before you proceed to give the record another spin. It's a good album by the reunited team of Incursion that has crafted an album that sets the stage for more to follow.