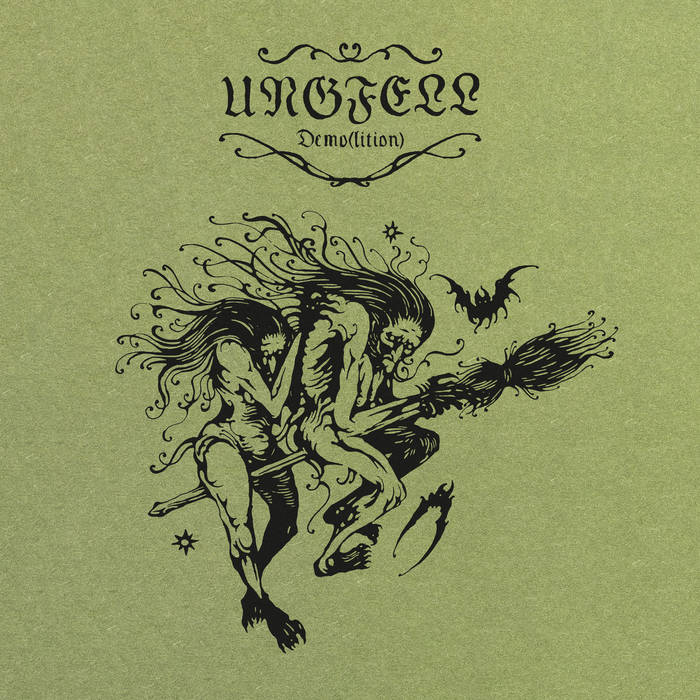 The rustic Alpine metal maniacs Ungfell at this point need no introduction. With three records these Swiss warlocks have made their mark with their brand of savage folkish black metal that’s relentless yet very melodic and vibrant, and this month they’re reissuing the record that started it all for them, their Demo(lition), through Eisenwald.

Formed in 2014 by Menentekel, in this early incarnation the drums were played by Infermità, and while the current drummer Vâlant is present here (more on that later), for the most part this is indeed a demo, a very primitive and raw sounding demo, however, what’s very impressive and the definitive proof as to why Ungfell deserve the hype they’ve gotten, is how from the very beginning, Ungfell had a definitive and unmistakable sound, and ever since this demo, they’ve only improved.

However, and this is something I just have to say for the sake of disclosure, while Ungfell’s sound is indeed distinct and they would make it their own moving forward, this demo is where they overtly display their influences, and the influence a lot of metalheads will notice, is that of the unsavory and extremely controversial French band; Peste Noire, who are a band I really don’t have nor want to elaborate on, if you know, you know. The major differences Ungfell has with that band are obviously the lyrics (thank Satan), and the atmosphere and overall execution, while the band’s style is very much black/folk metal, the songs have a very thrashy and metallic sound, and the overall atmosphere is much more demented in a way that’s similar to old school Norwegian black metal, so while the very obvious comparison and similarity is there, musicwise, I’m also very aware and understand that these are the very fist songs, its a demo, and therefore, wearing their influences in their sleeves is very much inevitable at this stage.

Since this is a remastering, that also means the sound is gonna be different? Well, yes, but the way the demo was remastered is actually a bonus, since the sound is much clearer but all the rawness and grit from the original demo is intact, so it's really a bonus, especially for those looking to buy this on vinyl. And finally, much like when Eisenwald reissued the band’s debut full length, they also included a bonus track, in this case its a previously unreleased track which, according to the band is the very first track Vâlant ever played on, called 'De Wolf Vo Ringgebärg', and was written and recorded back in 2017, so in many ways this one track is the link between the band’s debut and their sophomore where they really hit their stride and locked on their own sound and style, and yes it’s a really good and strong track that could’ve easily fit in the debut or the sophomore, though, that’s also the one issue I have, this track coupled with the demo tracks is a wild disconnect, especially since it follows the rehearsal track that originally closed the demo, so does the feeling makes this reissue feel more like a compilation that a cohesive body of work, but at the same time, that doesn’t make the reissue bad and all the material is strong, but I do recommend approaching this reissue as both a snapshot of the band’s early days with a really good song that exemplifies their development.

All in all, this reissue is a welcomed addition for Ungfell. It shows the band at their early stage and it ends with a display of how far they’ve come so if you’re an Ungfell completionist this is an easy recommend, and for everyone else, a neat little curio.